SAN DIEGO (KUSI) – Police today released a sketch of a man suspected of abducting and sexually assaulting a 27-year-old woman in San Diego. The attack occurred in the area of 3900 Broadway, according to Lt.Jason Weeden of the San Diego Police Department. 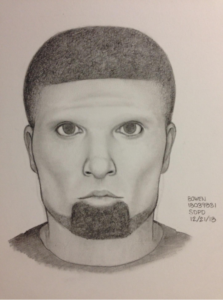 The victim was walking about 11:30 p.m. Thursday in the 3900 block of Delta Street when a white older-model, two-door pickup truck pulled alongside her, Weeden said.

A short time before the attack, the Chula Vista Police Department reported “a similar assault with a similarly described suspect and vehiclewithin their jurisdiction,” that is also under investigation, Weeden.

The suspect was described as black, 40-50 years old, 5 feet 6 inches to 5 feet 8 inches tall, between 160 and 170 pounds with a muscular build, short black hair and a graying goatee. He was wearing a black or dark blue T-shirt and gray basketball shorts.

The pickup had an extended cab and possibly had a blue horizontal stripe on the side. A truck matching the description of the suspect’s vehicle was captured on video in the vicinity of the E Street trolley station in Chula Vista.