SAN DIEGO (KUSI)- A man was found dead in a drainage ditch in the Fox Canyon neighborhood this morning, police said. A 911 call came in at 11:30 a.m. reporting a man down in a ditch
behind a home on Auburn Drive near Loris Street, according to San Diego police Lt. Anthony Dupree.

Officers and San Diego Fire-Rescue Department personnel quickly arrived and found a man with trauma to his upper body. He was pronounced dead at the scene, Dupree said.

Homicide detectives were investigating, but there was no information on any possible suspects.

The victim has not yet been identified, but he was described as an Asian man in his 20s. 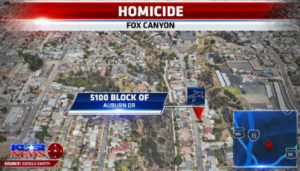