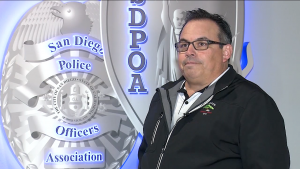 SAN DIEGO (KUSI) – As the city’s mandatory deadline for its employees to receive at least the first COVID-19 vaccination arrives Wednesday, Mayor Todd Gloria disagreed with a San Diego Police Officers Association claim that the police department is “alarmingly” understaffed, instead attributing slow response times to increased volume of calls.

“An incident involving a motorist driving on the sidewalk in Hillcrest sparked conversation of a two-hour response time from SDPD,” a statement from the association read. “Due to alarmingly low staffing levels citywide, officers were unable to quickly respond to 911 calls on Halloween evening.”

The association did not respond to follow-up questions.

“Rather than a lack of adequate staffing, delays in responding to 911 calls were due to an increased volume of emergency calls,” he said. “The amount of emergency calls on Sunday, November 14, 2021 alone increased by nearly 90% when compared to the year before.”

The SDPOA, which represents more than 1,850 law enforcement officers, has been a vocal opponent of vaccine mandates.

In a survey released in September, around 90% of 733 officers polled believed getting the vaccine should be an individual choice. More than three hundred officers said they’d rather be fired than be forced to take the vaccine.

“We’re going to do everything we can to retain the valuable members of our organization, but if folks choose to go somewhere else, we’ll do our level best to recruit topflight, high first-class talent,” Gloria said at the time.

“Of those 141 recruits, 26 are women and more than 68% are people of color,” he said. “I’m proud of our diverse recruitment efforts and remain committed to increasing diversity in all areas of the city.”

In September, the city announced all employees would have to be vaccinated for COVID-19, barring religious or medical exemptions. The deadline to show proof of full vaccination is Dec. 1.

SDPD Chief David Nisleit said the possibility of losing officers due to vaccine mandates was an issue.

“That’s concerning, the possible impacts of if we were to lose officers, you look at this police department, our ratio of officers to citizens is second-lowest in this nation, so obviously that impacts our ability to respond to crime,” he said.

In June the City Council unanimously voted to pass Gloria’s roughly $4.6 billion proposed budget, an increase of more than $537 million — or 13.4% — over last year’s spending plan. A not-insignificant $23 million increase to the San Diego Police Department’s budget was made despite calls asking the council to defund the SDPD’s overtime allocation by at least $10 million.

Much of the police budget increase is part of non-discretionary spending such as pensions, over which Gloria has little say, according to city officials. The budget cuts police overtime by $4 million.

The city has increased the SDPD’s budget for the last 10 years, an increase of more than $200 million since 2011.