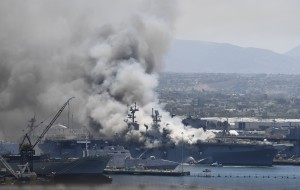 Seaman Apprentice Ryan Sawyer Mays, 20, was charged last Thursday with setting the July 12, 2020, fire, which burned for several days while the ship was docked at Naval Base San Diego.

Cmdr. Sean Robertson, a spokesman for the U.S. Third Fleet, confirmed Mays was the sailor charged, but declined to discuss the investigation further.

According to court documents, investigators swept the ship about a week after the fire and determined the blaze originated in an area called the “Lower V.”

The search warrants indicate one sailor reported seeing someone he was “fairly certain” was Mays enter the Lower V just before smoke was reported in the area. Mays was interviewed regarding the blaze and maintained his innocence, while denying being in the Lower V that day and stating “that he was being set up.”

A fellow sailor also told investigators Mays “hates” the Navy and a review of his Navy background showed he previously sought to become a Navy SEAL before dropping out of the SEAL training program, according to an affidavit.

Other details in the affidavit indicate that firefighting equipment may have been sabotaged. Firefighting stations in the Lower and Upper V areas were found to be “not in their normal configuration,” while firefighting hoses connected to the stations were found cut or disconnected.

A Navy official told ATF investigators that he believed the stations were “purposely tampered with and/or disconnected.”