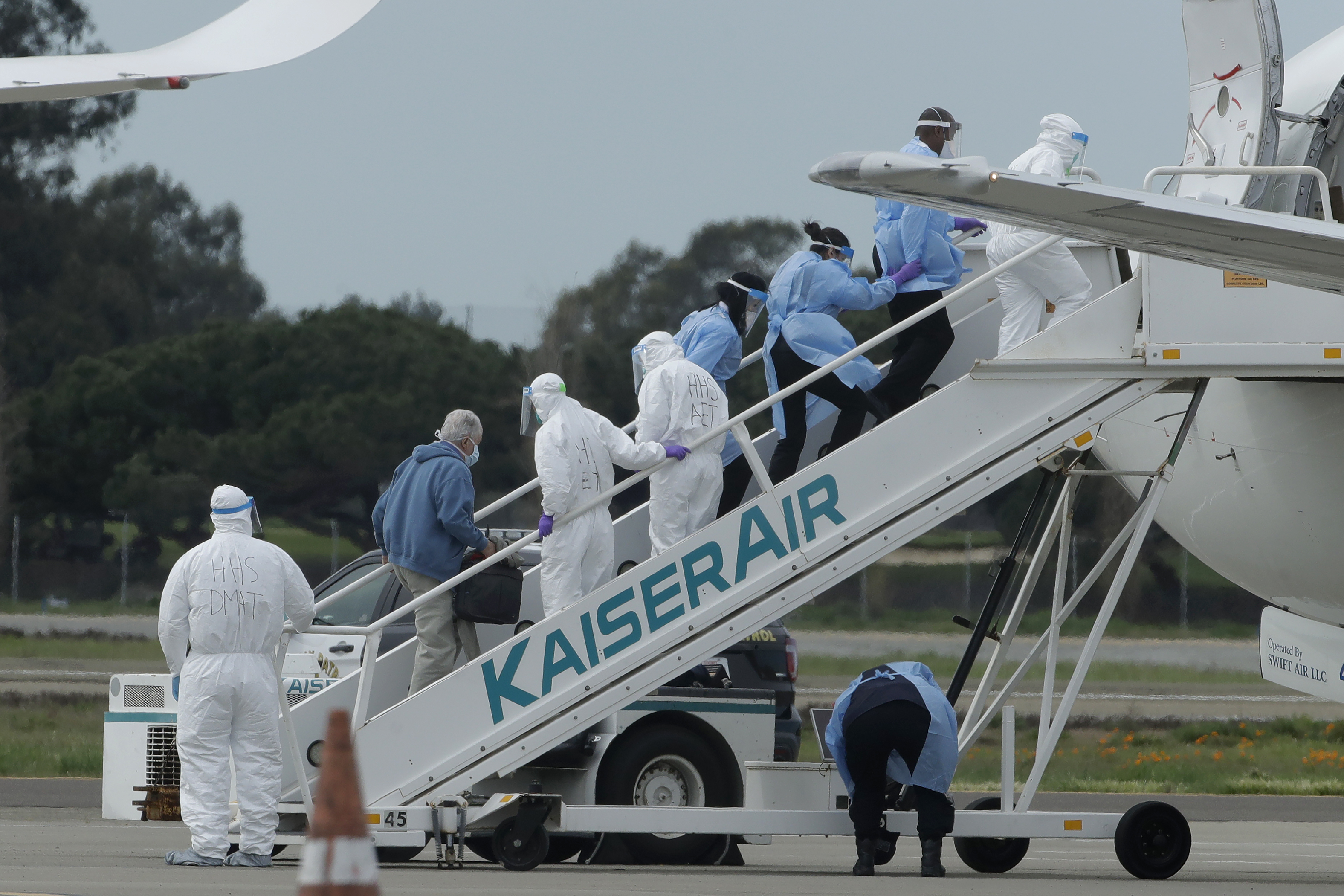 A passenger from the Grand Princess, a cruise ship carrying multiple people who have tested positive for COVID-19, second from left, boards a chartered plane in Oakland, Calif., Tuesday, March 10, 2020. The passengers on the flight are going to San Antonio to be quarantined at Lackland Air Force Base. (AP Photo/Jeff Chiu)

SAN DIEGO (KUSI) – A second group of passengers from the Grand Princess cruise ship, on which at least 21 people tested positive for coronavirus, is expected to arrive Wednesday at Marine Corps Air Station Miramar to begin a two- week quarantine period.

The cruise ship, which had roughly 3,500 people aboard — with at least 900 of them Californians — was being held off the coast of Northern California before it was allowed to dock in Oakland on Monday.

A group of between 50-60 Southern California residents who were aboard the cruise ship arrived at the base around 9:30 p.m. Tuesday on a flight from Oakland, the San Diego Union-Tribune reported.

A second flight carrying a “larger” group of passengers is set to arrive Wednesday, according to a tweet from MCAS Miramar. No details about the flight or its estimated arrival have been disclosed.

While some of the California residents will be housed at Miramar, others will be held at Travis Air Force Base northeast of Oakland.

Cruise ship passengers who are residents of other states are expected to be taken to Joint Base San Antonio Lackland in Texas or Dobbins Air Force Base in Georgia.

This will be second time Miramar has been used as a quarantine facility due to the coronavirus. More than 200 people who were evacuated from Wuhan, China — the epicenter of the outbreak — were housed at the facility last month. Two of those people eventually tested positive for the virus, but they were hospitalized and have since recovered and been released.

On Monday, San Diego County health officials confirmed the county’s first presumptive positive case of coronavirus in a local resident, who is being treated at Scripps Green Hospital.

The case is considered a presumptive positive until test results are confirmed by the U.S. Centers for Disease Control and Prevention. Scripps has taken precautionary measures and sent any staff who may have been exposed to the illness to home quarantine with hospital support.

“Scripps Green Hospital and the adjacent Scripps Clinic Torrey Pines are safe for patient care and all appointments and procedures are continuing as usual at both facilities,” according to a hospital statement.

Dr. Wilma Wooten, the county’s health officer, said the patient is a woman in her 50s, and the infection is related to “overseas travel.” County officials did not specify what country the patient had visited, but the location did not subject her to automatic 14-day quarantine when she returned — an indication she did not travel to high-danger countries such as China or Italy.

Wooten said the patient is hospitalized and “doing well.” She said health officials are continuing to investigate to determine who may have come into contact with the woman.

Dr. Eric McDonald of the county’s Epidemiology Immunization Branch said there is a “household contact,” and that person is under a self- quarantine, and some health care workers may have been exposed. McDonald said the patient became sick and was hospitalized, and eventually met the criteria to be tested for coronavirus, leading to the positive result.

He said there is not believed to have been any contact with the “general public.”

Although the patient is considered the county’s first coronavirus case, the illness has had a presence in the San Diego area. Last week, authorities confirmed that a person who works at an AT&T retail store in Chula Vista had tested positive for the illness, prompting the temporary closure of some AT&T stores in the area. That patient was not considered a San Diego County case because the person actually lives in Orange County.

Meanwhile, UC San Diego announced on Monday it will move all lecture and discussion courses online starting March 25, due to fears of the coronavirus spreading.

Athletic events on campus will continue as scheduled but spectators will not be permitted, according to UCSD.

San Diego State University announced on Tuesday that it will begin transitioning all classes to virtual instruction as a precaution to prevent the spread of novel coronavirus.

There are no current cases of coronavirus in the SDSU community, but the university’s administration had begun encouraging faculty at the start of this month to consider moving course material and instruction into virtual spaces.

SDSU is offering training workshops for faculty to assist with the transition, which must be completed by April 6, according to an SDSU spokesperson. Until Tuesday, that move had been voluntary.

Following SDSU’s spring break, from March 30 to April 3, all classes will be held under virtual instruction through the end of the semester with some exceptions. The last day of classes is May 7.

The university will make decisions whether to host events on a case-by- case basis.