Seen but not heard: Lakers, Nets, NBA are silent in Shanghai

LeBron James raised his arms in appreciation of the cheering crowd in Shanghai shortly after the final buzzer, then removed his headband and flipped it toward some ticketholders clamoring for a one-of-a-kind souvenir.

He wasn’t heard, though. Nor was any other player or coach in China, in an NBA game like none other.

In response to the NBA defending Daryl Morey’s freedom of speech, Chinese officials took it away from the Los Angeles Lakers and Brooklyn Nets. All of the usual media sessions that were to be part of the teams’ preseason game on Thursday — including a news conference from NBA Commissioner Adam Silver and postgame news conferences with the teams — were canceled. It was the latest salvo in the rift between the league and China stemming from a since-deleted tweet posted last week by Morey, the general manager of the Houston Rockets.

“There will be no media availabilities for tonight’s game between the Brooklyn Nets and Los Angeles Lakers,” the NBA said in a statement Thursday, released a few hours before the game.

And there wasn’t. They came. They played. They left. They didn’t talk. 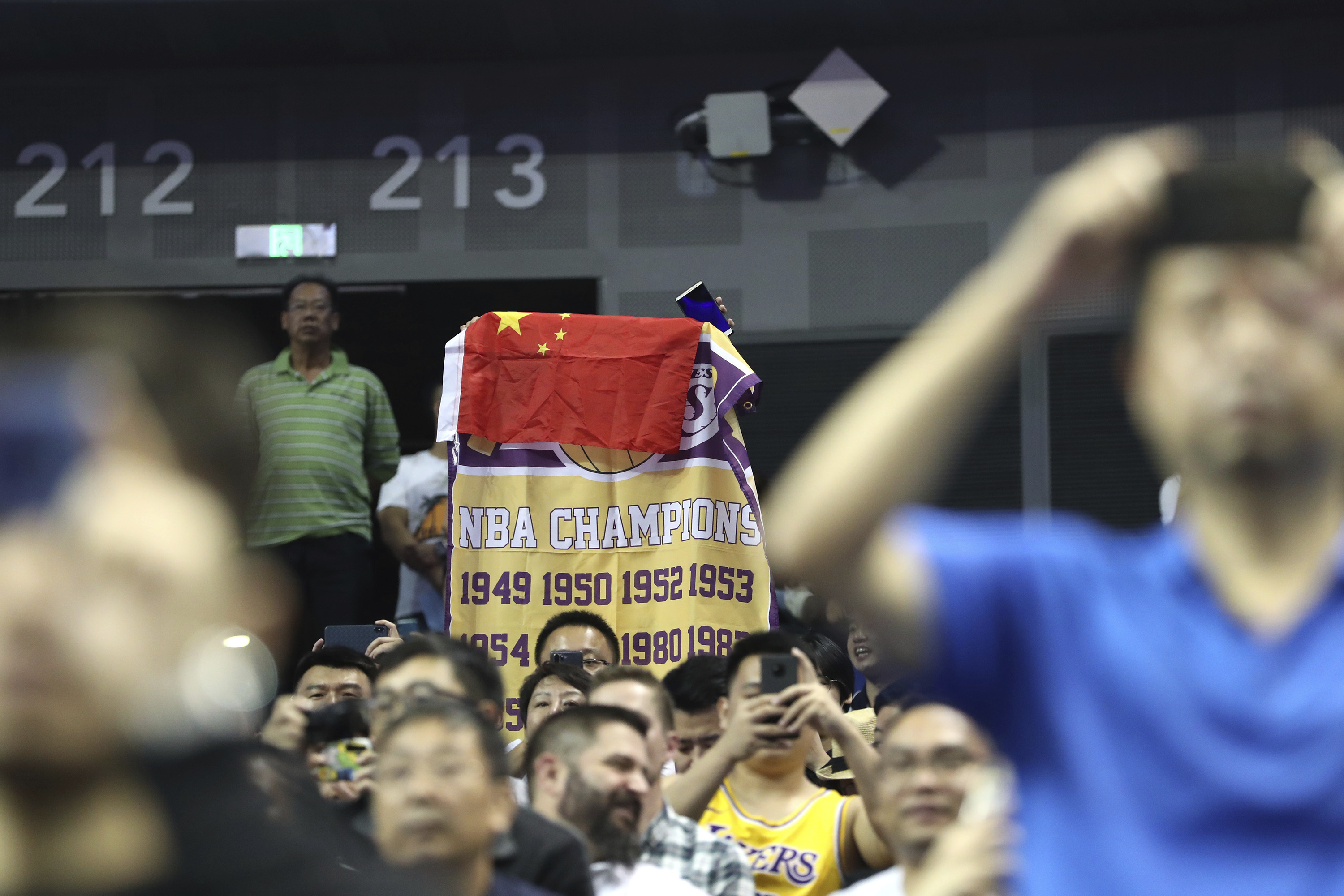 A fan drapes a Chinese national flag over an NBA banner during a preseason NBA basketball game between the Brooklyn Nets and Los Angeles Lakers at the Mercedes Benz Arena in Shanghai, China, Thursday, Oct. 10, 2019. In response to the NBA defending Daryl Morey’s freedom of speech, Chinese officials took it away from the Los Angeles Lakers and Brooklyn Nets. All of the usual media sessions surrounding the Lakers-Nets preseason game in Shanghai on Thursday — including a scheduled news conference from NBA Commissioner Adam Silver and postgame news conferences with the teams — were canceled. It was the latest salvo in the rift between the league and China stemming from a since-deleted tweet posted last week by Morey, the general manager of the Houston Rockets. (AP Photo)

The game was held as scheduled, with James and Nets guard Kyrie Irving getting loud ovations when they were introduced as starters. But neither the U.S. nor the Chinese national anthem was played before the game, and no players addressed the crowd before tip-off in a departure from tradition before such international games. Fans arriving at the arena to watch — many of them donning NBA jerseys — were handed small Chinese flags to carry with them inside, and at least one person carried a sign critical of Silver.

The Nets won, 114-111. That is not why this game will be remembered. Virtually all corporate signage was removed from the playing surface and other spots in Mercedes-Benz Arena, fans carried tiny Chinese flags and some even painted their country’s colors onto the faces.

“If we have to choose, we will choose to support our country,” said fan Ma Shipeng, who brought 900 miniature Chinese flags to hand out to fellow fans. “We only like some particular basketball players, but we don’t like NBA anymore. I give away Chinese flags tonight, as I hope people to put the national interest in front of following NBA. I will continue to support James. But none of our Chinese people would accept what Morey and Silver said.”

Morey’s tweet that showed support for anti-government protesters in Hong Kong has put a massive dent in the multibillion-dollar relationship between China and the NBA. And that tweet was why Chinese officials did not permit questions to be asked in Shanghai.

In Tokyo, it was the Rockets not permitting certain questions.

After Houston finished its two-game preseason series in Tokyo against Toronto on Thursday, CNN reporter Christina Macfarlane tried to ask Rockets guards James Harden and Russell Westbrook if they would be hesitant to speak out about political or societal issues going forward after having seen the fallout from Morey’s tweet.

A Rockets media official did not allow the question to be answered. The NBA later apologized to Macfarlane, saying the Rockets’ decision was inappropriate.

“We’ve apologized to Ms. Macfarlane as this was inconsistent with how the NBA conducts media events,” the NBA said.

Other than the no-media-session mandate, the Lakers-Nets game was no different than any other game. Most seats were filled, and fans reacted as they would normally — oohs and aahs for good plays, applause for baskets, the loudest cheers coming whenever James touched the ball. It appeared most fans stayed until the end, even though James and fellow Lakers standout Anthony Davis didn’t play down the stretch and Irving left after just 66 seconds with an aggravation of a facial fracture.

“I understand that there are consequences from that exercise of, in essence, (Morey’s) freedom of speech,” Silver said at a news conference in Tokyo earlier this week. “We will have to live with those consequences.”

Most events in advance of the game, such as NBA Cares events to benefit educational causes and the Special Olympics, were called off, as was a “fan night” where Lakers and Nets players were to interact directly with some Chinese ticketholders. Signage in Shanghai to promote the game was ripped down, and mentions of the game were scrubbed from the arena website.

All that comes as many Chinese corporations suspended their business ties to the NBA. Chinese state broadcaster CCTV did not show Thursday’s Lakers-Nets game and does not plan to show their next matchup at Shenzhen on Saturday. NBA broadcast partner Tencent has said it is changing its coverage plans for the league as well, and canceled credential requests in some U.S. arenas for preseason games this week.

Plus, the NBA apparently has to mend a fence with Rockets great Yao Ming, a Basketball Hall of Famer and now the president of the Chinese Basketball Association. The CBA has also suspended its ties with Houston as part of the Morey tweet fallout.

The Rockets were extremely popular in China, largely because of Yao. But the team’s merchandise has not been for sale in China for several days, and some murals featuring the team’s stars and logo have been painted over. Morey has been silent on the matter since tweets Sunday where he attempted to make amends.

The Latest: Sciorra: Testimony against Weinstein was needed