SAN DIEGO (KUSI) – A semi truck crash in the Barrio Logan area may have triggered a power outage to more than 3,700 San Diego Gas & Electric customers Friday morning in the Mountain View, Lincoln Park and Logan Heights areas, as well as parts of National City.

It happened around 1:45 a.m. near the intersection of 30th and Main streets, San Diego police Officer Tony Martinez said.

The circumstances leading up to the crash were unclear, but at some point the semi truck struck two vehicles and knocked down power lines, Martinez said.

The semi truck also caught fire, but firefighters responded to the scene and quickly doused the flames, the officer said. 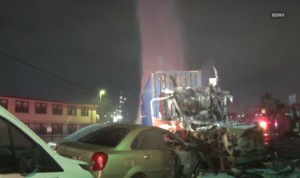 A man driving the semi truck was taken to a hospital for treatment of minor injuries, Martinez said.

No other injuries were immediately reported.

An outage was reported at 2:54 a.m., affecting 3,766 SDG&E customers in the Mountain View, Lincoln Park and Logan Heights areas along with parts of National City and residents near south 32nd Street, according to San Diego Gas and Electric’s online outage map.

Customers affected by the outage were expected to have power restored by 10 a.m., according to SDG&E.