NEW YORK (AP) — Sen. Josh Hawley has found a new publisher after his book was dropped by Simon & Schuster in the wake of the siege of the U.S. Capitol by supporters of President Donald Trump.

The conversative publisher Regnery announced Monday that Hawley’s “The Tyranny of Big Tech” will come out this spring.

“Regnery is proud to stand in the breach with him. And the warning in his book about censorship obviously couldn’t be more urgent,” Regnery President and Publisher Thomas Spence said in a statement. 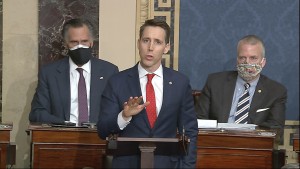 In this image from video, Sen. Josh Hawley, R-Mo., speaks as the Senate reconvenes to debate the objection to confirm the Electoral College Vote from Arizona, after protesters stormed into the U.S. Capitol on Wednesday, Jan. 6, 2021. (Senate Television via AP)

Hawley, a Republican from Missouri, has been widely condemned for his encouragement of the Jan. 6 protest that ended with a violent mob rampaging through the Capitol. Thousands had gathered that day as Congress voted to formally certify Joe Biden’s win over Trump. Hawley and Sen. Ted Cruz of Texas, also a Regnery author, led objections in the Senate to Biden’s victory, citing baseless claims the election was stolen.

The Tyranny of Big Tech by Josh Hawley will release May 4th and is available for pre-order wherever books are sold.