The compromise, announced by the West Virginia lawmaker and a Democratic aide, seems to clear the way for the Senate to begin a climactic, marathon series of votes expected to lead to approval of the sweeping legislation. 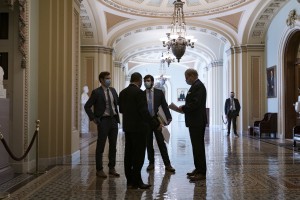 Congressional staffers wait in the ornate corridor outside the Senate chamber during a delay in work on the Democrats’ $1.9 trillion COVID-19 relief bill, at the Capitol in Washington, Friday, March 5, 2021. (AP Photo/J. Scott Applewhite)

The overall bill, President Joe Biden’s top legislative priority, is aimed at battling the killer pandemic and nursing the staggered economy back to health.

Biden to pull troops from Afghanistan, end longest US war