One injured in shooting on the 4600 block of Convoy Street 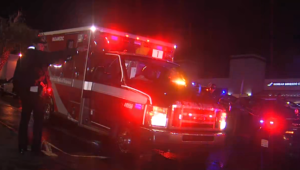 KEARNY MESA (KUSI)- One person was critically wounded tonight in a shooting outside of a restaurant in a strip mall in the Kearny Mesa area of San
Diego.

Police responded about 10 p.m. to witness reports of eight to 10 men fighting in the 4600 block of Convoy Street and four to six shot fired, according to Officer John Buttle of the San Diego Police Department.

A witness spoke to KUSI saying that he heard three gun shots and saw that the man was shot in the torso and the leg.

The victim was transported to the hospital.

Police are looking for two possible suspects believed to be connected to the shooting.

The other men involved in the fight left the area in unknown directions, Buttle said. A description of the suspects were not immediately available.

Responders are on the scene.

This is a developing story.