Some oil from California spill breaks up in ocean currents 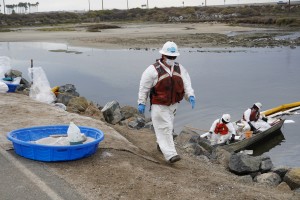 LONG BEACH, Calif. (AP) — Some of the oil that spilled from a pipeline into the waters off Southern California has been breaking up naturally in ocean currents.

That’s according to a Coast Guard official who spoke to reporters Wednesday.

Petty Officer Steve Strohmaier says some of the oil has been pushed to the south by currents.

Storms earlier in the week may also have helped disperse the oil.

He says that movement could make it more challenging to skim the oil as it spreads out.

He also says the biggest problem is the uncertainty about the amount that leaked into the water.