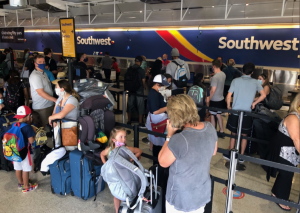 Lines of delayed Southwest Airlines travelers could be seen filling the aisles at the San Diego International Airport.

LOS ANGELES (KUSI) – Computer issues caused widespread flight delays and disruptions for Southwest Airlines in the Southland and beyond for the second consecutive day.

“We are in the process of resuming normal operations after a system issue this afternoon that created flight disruptions throughout our network,” Southwest Airlines posted on Twitter shortly before 1 p.m. “We know many customers still require assistance and are working to address those concerns as quickly as possible.”

The trouble began Monday night with issues with the company’s third- party weather data provider, prompting the airline to ground its jets for several hours before some flights resumed. Tuesday’s technical issue, which also briefly grounded the airline, was being investigated, according to Southwest officials.

About two dozen flights were delayed at John Wayne Airport alone on Tuesday. There were about 26 delayed arrivals and 13 departures, but the numbers were going up and down as the airline restored its services.

Marisa Unvert, a spokeswoman for the airport, told City News Service that — as of about 2 p.m. — the company’s systems were back online and the ground stop had been lifted, but additional cancellations and delays were anticipated.

There were also expected impacts on other airline operations at the airport, she said.