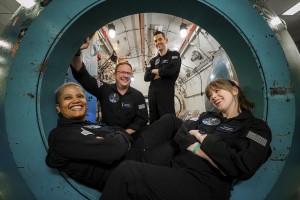 In this July 2, 2021 photo provided by John Kraus, from left, Sian Proctor, Chris Sembroski, Jared Isaacman and Hayley Arceneaux pose for a photo at Duke Health in Durham, N.C, during hypoxia training to understand how each crew member reacts in a low-oxygen environment. (John Kraus/Inspiration4 via AP)

It was the first time a spacecraft circled Earth with an all-amateur crew and no professional astronauts.

But this time, the Dragon capsule aimed for an unusually high orbit, 100 miles higher than the International Space Station.

The Dragon capsule’s two men and two women are looking to spend three days circling the world, before splashing down off the coast of Florida.

Buttigieg under fire after taking 2 months of paternity leave

Aircraft Expert gives his thoughts on the Santee plane crash

What is the Shiba Inu coin?