WASHINGTON (AP) — House Democrats are refining part of their impeachment case against the president to a simple allegation: Bribery.

House Speaker Nancy Pelosi on Thursday brushed aside the Latin phrase “quid pro quo” that Democrats have been using to describe President Donald Trump’s actions toward Ukraine. As the impeachment hearings go public, they’re going for a more colloquial term that may resonate with more Americans.

The Democrat led House has opened its historic hearings to remove America’s 45th president, with more to come Friday, launching a political battle for public opinion that will further test the nation in one of the most polarizing eras of modern times. 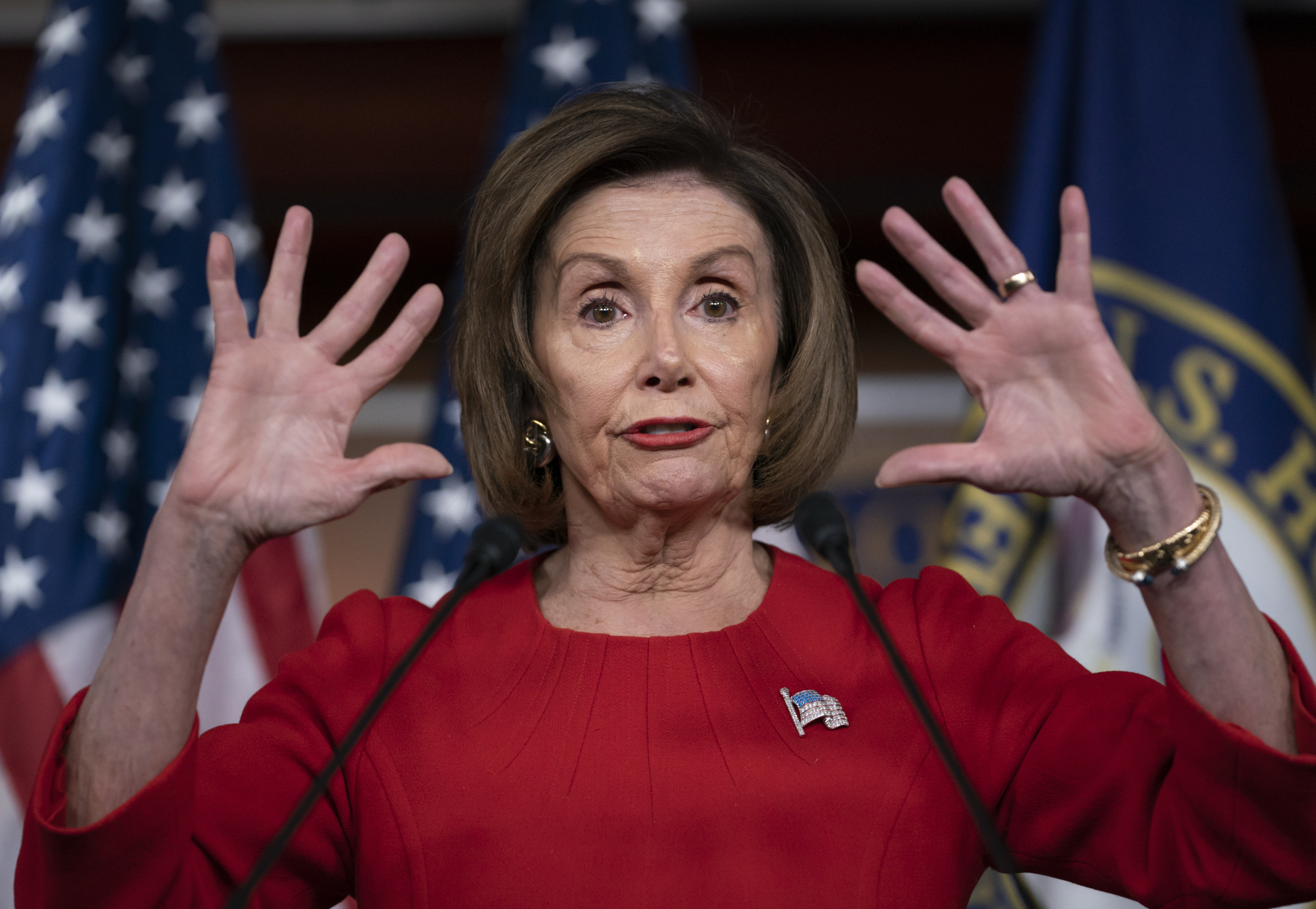 Speaker of the House Nancy Pelosi, D-Calif., talks to reporters on the morning after the first public hearing in the impeachment probe of President Donald Trump on his effort to tie U.S. aid for Ukraine to investigations of his political opponents, on Capitol Hill in Washington, Thursday, Nov. 14, 2019. Pelosi says the president’s actions in the impeachment inquiry amount to “bribery.” (AP Photo/J. Scott Applewhite)

Democrats and Republicans are hardening their messages to voters, who are deeply entrenched in two camps.

Trump continued to assail the proceedings as “a hoax” on Thursday, and House GOP Leader Kevin McCarthy dismissed the witness testimony as hearsay, at best second-hand information.

The president, who said he was too busy to watch the initial hearing as it was televised, caught up in the White House residence Wednesday evening and tweeted along with a Fox News morning recap Thursday.

The president flatly denied the latest revelations. During Wednesday’s hearing a diplomat testified that another State Department witness overheard Trump asking about Ukraine investigations the day after his phone call with Kyiv.

“First I’ve heard of it,” he said, brushing off the question at the White House.

While Trump applauded the aggression of some of his GOP defenders, he felt that many of the lawmakers could have done more to support him and he pressed that case with congressional allies ahead of the next hearing, according to Republicans who were not authorized to speak publicly about private conversations and were granted anonymity.

On Friday, Americans will hear from Marie Yovanovitch, the career foreign service officer whom Trump recalled as the U.S. ambassador to Ukraine after what one State Department official has called a “campaign of lies” against her by the president’s personal lawyer, Rudy Giuliani.

At its core, the impeachment inquiry concerns Trump’s July phone call with Zelenskiy that first came to attention when an anonymous government whistleblower filed a complaint.

In the phone conversation, Trump asked for a “favor,” according to an account provided by the White House. He wanted an investigation of Democrats and 2020 rival Joe Biden. Later it was revealed that at the time the administration was withholding military aid from Ukraine.

“The bribe is to grant or withhold military assistance in return for a public statement of a fake investigation into the elections,” Pelosi said. “That’s bribery.”

It’s also spelled out in the Constitution as one of the possible grounds for impeachment — “treason, bribery or other and high crimes and misdemeanors.”

During Day One of the House hearings, career diplomats William Taylor and George Kent delivered somber testimony about recent months.

They testified how an ambassador was fired, the new Ukraine government was confused and they discovered an “irregular channel” — a shadow U.S. foreign policy orchestrated by Giuliani that raised alarms in diplomatic and national security circles.

It’s a dramatic, complicated story, and the Democrats’ challenge is to capture voter attention about the significance of Trump’s interactions with a distant country.

With a hostile Russia its border, Ukraine is a young democracy relying on the U.S. as it reaches to the West.

A spokesman for the national Republican Party, Rick Gorka, said there’s been a surge of volunteers and the response “we’re receiving from the field has been tremendous.”

Trump set to headline a rally Thursday night in Louisiana, remained out of sight for most of the day and was monitoring a mass school shooting in California, according to aides.

Behind closed doors this week Pelosi reminded Democratic lawmakers of the importance of presenting a “common narrative” to the public as the proceedings push forward, according to a Democratic aide.

“We’re in Chapter One of a process,” said Rep. Raja Krishnamoorthi, D-Ill., a member of the Intelligence Committee conducting the inquiry. The challenge, he said, is educating Americans about what happened “and then explaining why it matters.”

Speaker Pelosi’s full press conference was streamed on her Facebook page. You can watch it below or by clicking here.

One day after the House held the first public hearing in our impeachment inquiry, I am speaking to reporters about our ongoing work for the people.

Associated Press writers Jonathan Lemire in New York and Laurie Kellman and Jill Colvin in Washington contributed to this report.

Thursday, @SpeakerPelosi said she welcomes @realDonaldTrump to prove his innocence. Trump says his Ukraine call was perfect, while Pelosi says it was "perfectly wrong. It's bribery."