SAN DIEGO (KUSI) – So how much do you really need to make each year to be able to buy a house?

A new study by the cost information site How Much looked at home affordability in some of the 50 largest U.S. cities.

What may be a surprise is San Diego ranks third, before Los Angeles.

A household would have to bring in 131,000 dollars in annual income in order to afford a median sized home.

The most affordable of the top 50 U.S. cities is Pittsburgh.

Do You Earn Enough to Afford a House in the Largest U.S. Metros?

Owning a home is one of the biggest financial milestones. Data from the U.S. Census Bureau indicates that the homeownership rate nationwide is 64.8%, slowly reversing a downward trend that started in 2004. Despite these recent gains, homeownership is still out of reach for many people. One of the main reasons for this is that wages haven’t kept pace with soaring home prices, and many people are priced out of the real estate market.

Fortunately, some parts of the U.S. are friendlier to potential homebuyers’ wallets than others. Our latest visualization illustrates the salary that a household needs to make in order to buy a median-priced home in the 50 largest metro areas in the U.S. 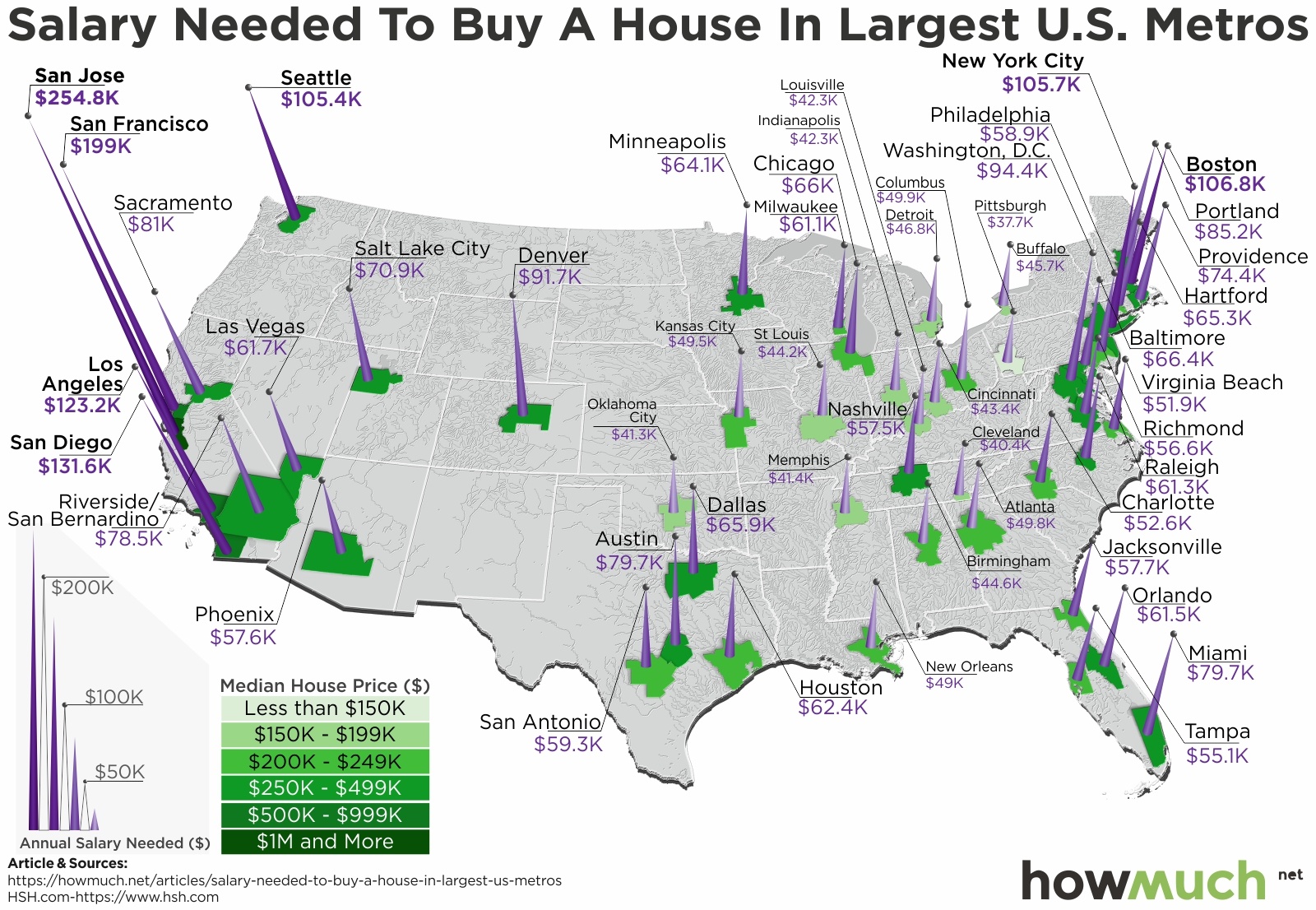 The data for this visualization comes from the mortgage information site HSH Associates. In conducting their analysis, HSH compiled median-home price data from the National Association of Realtors, national mortgage rate data from Freddie Mac and the Mortgage Bankers Association of America, and property tax and homeowner’s insurance costs data to determine the annual salary it takes to afford a home (including principal, interest, property tax and homeowner’s insurance, or PITI) in the nation’s 50 largest metropolitan areas. The analysis also assumed a down payment of 20%.

In general, metro areas in the Midwest and the South require lower salaries than metro areas on the West Coast and the East Coast. The most expensive metros are located in California, especially near Silicon Valley. For example, San Jose requires the highest salary ($254,835.73) for a median-priced home and San Francisco requires the second-highest salary ($198,978.01). Metros in the Northeast, like Boston ($106,789.93) and New York ($105,684.33) are similarly expensive. On the flip side, Pittsburgh only requires a salary of $37,659.86 to buy a median-priced home. Metro areas like Memphis ($41,400.93) and Oklahoma City ($41,335.41) require about one-sixth the salary required in San Jose.

HSH notes that when looking at the nation overall, you would need to earn $61,453 in order to buy a home. However, 24 of the largest 50 metro areas require a higher salary to make it affordable. It’s also worth noting that even within metro areas, home prices and salaries can differ by zip code or neighborhood, so final costs could vary even more. Overall, when deciding where to buy a home or look for a job, taking the area’s salaries and housing costs into consideration becomes even more important.