SAN DIEGO (KUSI) – Supervisor Nathan Fletcher has been unanimously nominated Chair of the San Diego County Board of Supervisors for the second consecutive year.

Fletcher’s nomination as Chair makes him the first person to serve two consecutive years in over four decades. Until now, the San Diego County Board of Supervisors has rotated Chair on an annual basis, but that typical decades long rotation has been broken.

It is unclear why the Board broke the typical rotation, or why the two Republicans voted to nominate Fletcher after criticizing him over his COVID-19 policies over the last two years.

During brief remarks made after the vote, Chair Fletcher said,

The Board also voted unanimously for Nora Vargas as vice-chairwoman and Terra Lawson-Remer as chair pro-tempore.

The vote also marked the second year in the row for Vargas in her leadership positions. Lawson-Remer replaces Joel Anderson as chair pro- tempore.

Originally, Anderson was nominated to serve as chair pro-tempore, but proposed that Lawson-Remer take over.

A year later, both Republicans, @Jim_Desmond & @JoelAndersonCA voted for him to be Chair.

The San Diego County Board of Supervisors meeting was streamed live on their YouTube channel, which you can watch below:

Supervisor Fletcher touted his nomination which broke the norm via Twitter immediately after he was unanimously nominated.

According to the San Diego County website, Lucille Moore served as Chair three consecutive years from 1977 through 1979. Supervisor’s Fletcher’s original tweet (below) stated 70 years, but has since been deleted. 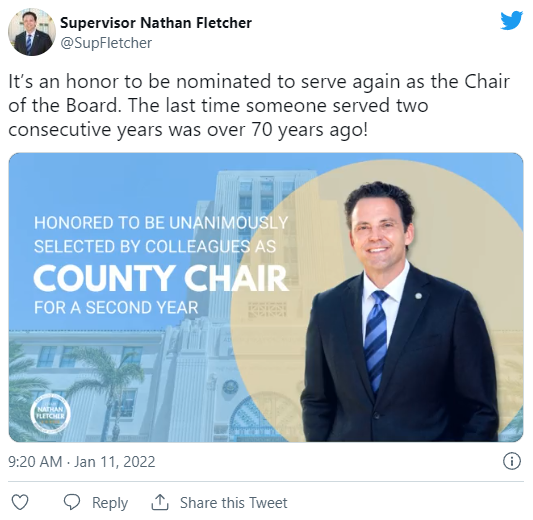 Supervisor Fletcher reposted the tweet announcing his nomination with a different caption.

It's an honor to serve again as Chair of the Board of Supervisors. We'll be a County You Can Count On, that is our vision, our mission, and our focus this year. pic.twitter.com/YYWY31S8rZ

Congratulations, @SupFletcher! The City and County have worked collaboratively on homelessness this year like never before, and this continuity in leadership will ensure we're able to keep up the momentum and make real progress in helping folks off the streets and into homes. https://t.co/KXqDtNrYQN