SAN DIEGO (KUSI) – The Board of Supervisors unanimously agreed Tuesday to ask the state Department of Social Services to extend operations at the San Pasqual Academy in Escondido, which houses and educates foster youth and is slated to close in October due to declining enrollment.

State and federal law changes regarding foster care will also end funding to the academy, described by county officials as a first-in-the-nation residential educational campus designed specifically for foster youth. 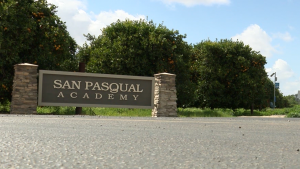 If the state allows it to remain open through June 30, 2022, the county would spend $1.4 million to cover the loss of Title IV federal funding.

Based on a request from Supervisor Jim Desmond, the county will also work with state and federal officials to see if the academy could be granted a license to operate past the June 2022 date.

“I understand the laws have changed, but (the academy) is unique,” Desmond said.

The academy is operated as a public-private partnership between the County of San Diego, New Alternatives Inc., the San Diego County Office of Education and Access Inc.

Open since 2001, SPA has been lauded for its successful education programs and high graduation rate. The residential education campus serves foster youth ages 12-17 years old, and non-minor dependents up to 19.

Supervisor Nora Vargas said that while she supports an extension for SPA, the county should have a larger conversation about how to best serve foster youth.

“I’m not ready to say, `Let’s keep this one open forever,” she said.

Board Chairman Nathan Fletcher said SPA supporters need to understand that “it’s unlikely the federal and state government will change their entire approach to foster care.”

Fletcher said the purpose of SPA is not under attack, and that the county has taken steps to improve the entire foster care system, including for those who are not at the academy, which was approved by the California Department of Social Services as a three-year pilot project.

If a license extension isn’t granted, Fletcher asked, “How do we ensure we remain united in protecting foster care youth?”

The Rev. Shane Harris, a social justice advocate and SPA graduate, urged the board to keep the facility open. He added that supporters have a petition with 500 signatures.