WILMINGTON, Del. (AP) — President Donald Trump and his Democratic challenger, Joe Biden, were already set to fight when they share a stage Tuesday in Cleveland, but the death of Supreme Court Justice Ruth Bader Ginsburg means things may get tenser even faster.

Moderated by Fox News’ Chris Wallace, the 90-minute debate will feature segments on the Supreme Court, the coronavirus, the economy, race and policing, election integrity and the candidates’ records. Trump’s taxes will also likely be a focus after The New York Times reported that he paid just $750 in federal income taxes the year he ran for office and paid no income taxes at all in many other years. 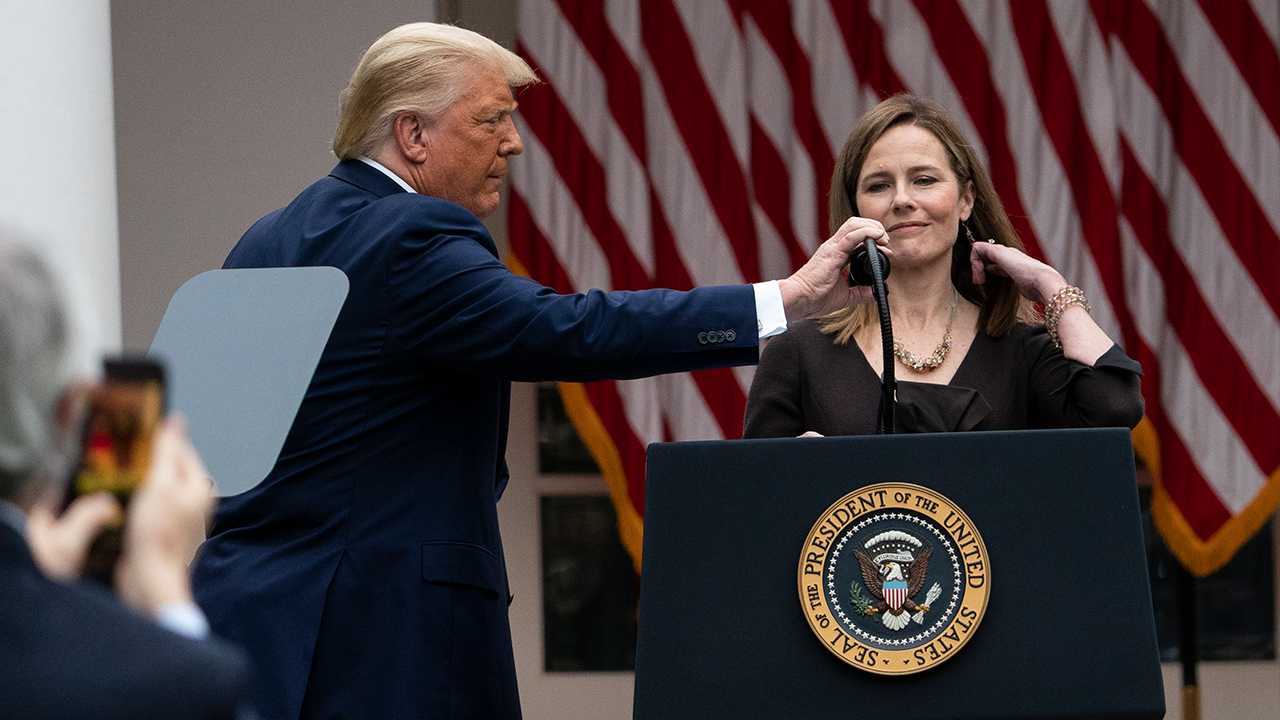 Judge Amy Coney Barrett applauds as President Donald Trump announces Barrett as his nominee to the Supreme Court, in the Rose Garden at the White House, Saturday, Sept. 26, 2020, in Washington. (AP Photo/Alex Brandon)

Still, the court is expected to be the dominant topic in the debate, with other top issues being seen along the same ideological spectrum.

“In national campaigns, we always say the court is important,” said Robert Barnett, who has advised Democratic candidates on debate prep since Jimmy Carter’s running mate, Walter Mondale, in 1976. “This time it may actually turn out to be.”

Both candidates are likely to repeat their talking points about the Supreme Court. But during the debate, their comments are likely to reach vast swaths of the electorate that haven’t been following the campaign closely. Biden has said Ginsburg’s seat should remain vacant until after the election, while Trump has nominated Amy Coney Barrett and the Republican-controlled Senate is rushing to confirm her.

Biden promises to name a Black woman to the court if he gets the chance, but has resisted Trump’s call for him to release a list of possible Supreme Court nominees, as Trump did this year and in 2016. Biden also won’t commit to expanding the court, as some leading progressives are advocating, arguing that to do either would be playing politics by Trump’s rules.

He’s instead using the vacancy to focus on how the court fight could threaten the Obama administration’s signature health care law amid a pandemic — a case he’ll make again during the debate.

“It doesn’t matter to them that millions of Americans are already voting on a new president and a new Congress,” Biden said of the Trump administration during a speech Sunday in Wilmington, Delaware. “They see an opportunity to overturn the Affordable Care Act on their way out the door.”

Trump, for his part, is likely to brag about the two justices he’s already put on the Supreme Court and look to energize his base with the prospect of a third, which would give conservatives a 6-3 advantage on the court.

“Most important of all, she will defend your God-given rights and freedoms,” Trump said of Barrett during a weekend rally in Pennsylvania, where the crowd chanted, ”Fill that seat!”

Brett O’Donnell, who has helped five Republican presidential candidates prepare for debates and was formerly the debate coach at Liberty University, said he expects Trump to say “a lot of what he’s already been saying about the courts on the stump.”

“If you watch his debate performances, much of what happens in the debates gets tested out in his town halls,” he said.

O’Donnell said he’d expect there would be discussion of Democrats’ argument that Republicans are hypocritical for pushing to confirm a justice with Election Day just weeks away, despite their refusal four years ago to confirm President Barack Obama’s nominee in an election year when voting was still months off.

He said Biden will have to highlight the Senate fight to start but would “be wise to pivot to the consequences” of a court with three Trump nominees, including stricter limits on abortion and voting rights, relaxed gun regulations and the potential overturning of the Affordable Care Act — which the Supreme Court could determine is unconstitutional in a case that will be heard just after the election.

Chuck Rocha, a top adviser to Bernie Sanders’ presidential campaign, said the court vacancy “is huge for the Republicans, way more than the Democrats.”

“There’s no way now that any Democrat or independent who thinks the Supreme Court justice was important wasn’t already voting for Joe Biden,” Rocha said. “There is a whole bunch of, I would call them moderate, common sense Republicans, who … really want to vote for Joe Biden because they just personally don’t like what Donald Trump has done to the presidency. But this Supreme Court pick gives them the exact reason to hold their nose and vote for somebody they despise because it falls in line with their ideological values.”

The court vacancy will have to compete with Trump’s taxes coming to light. But sometimes major news events that seem sure to dominate debates don’t end up having the anticipated impact. In October 2016, an “Access Hollywood” tape in which Trump talked in lewd terms about grabbing women by their genitals without consent came to light just days before a debate.

Most political observers saw Clinton as prevailing in the debate that followed, but the tape didn’t ultimately come to define the last weeks of the election.

Biden noted last year that he was among the people Clinton consulted on how to handle the recording during the debate — and that he regretted telling her not to focus on it because he thought political brawling might be a boon for Trump. He recalled advising Clinton to “not get into the debate because it just drags it down.”

He’s not planning on making that mistake this time.

Aides say Biden plans to forcefully make the case that Trump failed the American people on the coronavirus, wrecked the economy and is trying to steal an illegitimate Supreme Court nomination on his way to undermining the election. The former vice president is also bracing for attacks from the 74-year-old president, including that he is too old at 77 to handle the rigors of the White House.

Rocha said Biden will likely use the Supreme Court vacancy and other issues to try to rattle Trump and get him to blurt out ill-advised remarks. Biden also has a history of saying things he regrets when losing his cool, though.

Rocha also said Tuesday will be of paramount importance to both campaigns since normally debates feature not only weeks of preparation but also extended pre- and post-event travel to hammer home key points — something that’s more complicated in the coronavirus era. Biden is planning a train tour through parts of Ohio and Pennsylvania after the debate, though.

“You have just one singular time to make an impression,” Rocha said.