Surf Soccer Club is a large organization that boys and girls from all over San Diego are honored to play for.

They host practices at the Polo Fields Del Mar, and have continued to do so while keeping their players safe.

ABC 10 recently ran a story calling out Surf Soccer because their young and healthy players were not wearing masks, or social distancing. 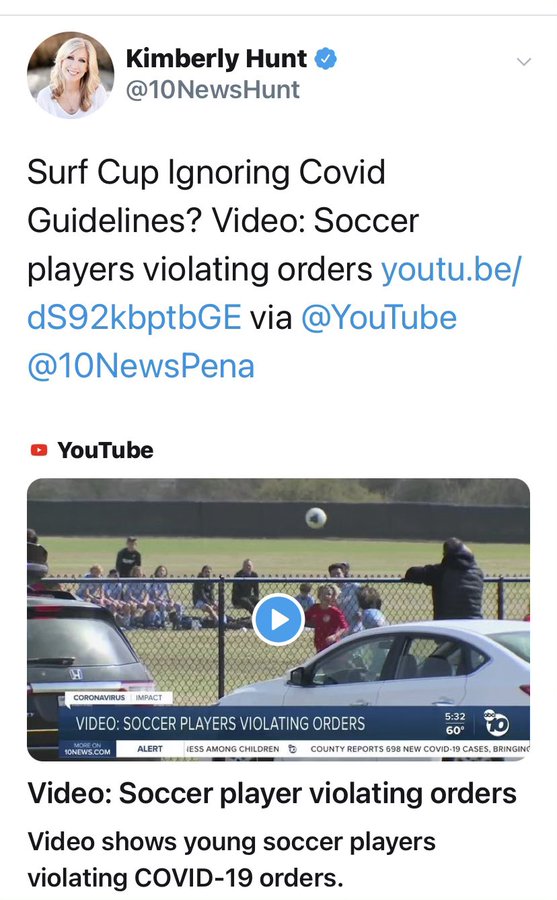 The Board President of the nearby Polo Club Homes community, Scott Kameron, was interviewed by ABC 10, and was so upset that kids were playing soccer, he felt the need to report the actions to the County of San Diego.

In response to ABC 10’s story, the Surf Soccer Club says they received a Cease & Desist letter from San Diego County demanding they stop activity since youth sports competition is not yet allowed by the state of California.

Hunt promoted the story on her Twitter page, and has since deleted it after Surf Soccer published the letter they sent back to the County of San Diego.

In short, Surf Soccer Club told San Diego County they respect them for doing their job, but they will continue to play soccer.

The letter began by asserting the club knows, “this is no longer about the science or keeping kids safe. The data is mounting every day that COVID transmission on sports fields is negligible.” Proving their point saying, “Miraculously, kids in 48 states are safely playing youth sports every day.”

Surf Soccer Club was extremely critical of San Diego County’s “unequal enforcement” efforts in regard to violations of the COVID guidelines. The letter read, “the only reason you are focusing on Surf is that our neighboring multi-million dollar home owners want to return our facility to support their horse lifestyle. Unequal use of your power is an abuse of your power.”

KUSI has repeatedly asked San Diego County health officials why our youth can’t resume sports competition, like the rest of the country, but we have yet to get a straight answer.

The complete letter to San Diego County from the Surf Soccer Club is below: 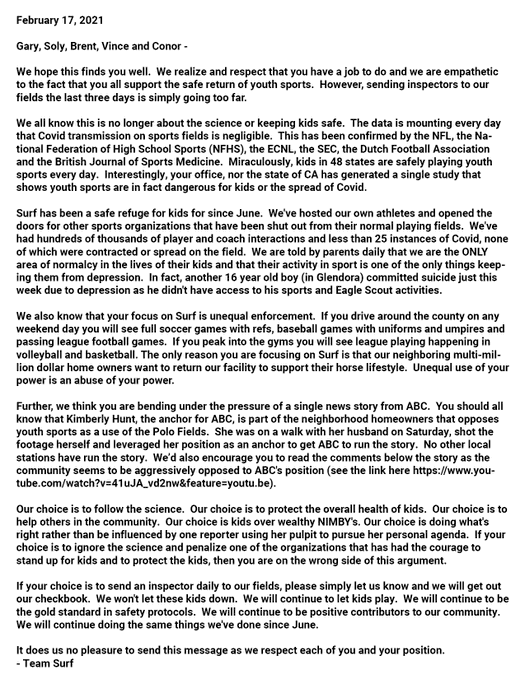 San Diego County officials taped a Cease & Desist order to our front door this morning. This is our response which we sent earlier today. #LetThemPlay #LetThemPlayCA #ReturnToPlay pic.twitter.com/VBNyw0DHdj

KUSI published a story on the dispute between Surf Soccer and the County of San Diego.

Surf Soccer held practice sessions , that concerned the County , in regard to COVID-19 regulations for

outdoor activity. The County issued “cease and desist “ orders that were not followed by the athletic

A letter sent from Surf Soccer to the County asserted that KGTV anchor, Kimberly Hunt was part of a neighborhood

group opposed to their activities .

KGTV has asked that we clarify the story

KUSI’s posting made no claims, except to show a tweet on the story, and to summarize the letter from the group to the county.