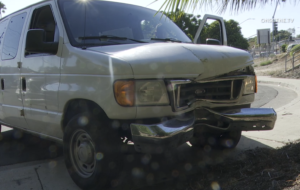 SAN DIEGO (KUSI) – A suspected car thief is in custody Saturday after he led officers on a brief chase that ended in Logan Heights, police said.

Officers began chasing the man — after license plates indicated he was driving a stolen vehicle — at about 4:14 p.m. Saturday, Officer Robert Eims of the San Diego police said.

The suspect was observed running a stop sign on Evans street in Logan Heights, realized he was being followed, and began speeding up before crashing. The suspect exited the truck, led a foot chase for about a block and was taken into custody, according to SDPD Lieutenant Erwin Manansala. “He was in a traffic collision involving no other person, so out of an abundance of caution medics are evaluating him to see if he needs any further medical attention,” Manansala said.

The chase ended about 30 minutes later when the suspect crashed the truck in the 800 block of South Gregory Street, near the Interstate 15 overpass.

The truck hit a palm tree and a telephone pole.

Besides the stolen truck, no other vehicles were damaged during the chase.

San Diego Fire-Rescue units were called to the scene to evaluate any potential danger from telephone pole live wires.

The Latest: 2 banks burned to ground in San Diego suburb