Sweden shrugs and sighs as Italy wins fight for 2026 Games

STOCKHOLM (AP) — Jubilation for the winners from Italy. A shrug of indifference by the losers from Sweden.

Stockholm-Are’s failed bid for the Winter Olympics in 2026 provided insight into the psyche of the Swedish population when it comes to getting behind ventures like a major sporting competition.

Even the opportunity for a winter sports giant to host a Winter Games for the first time in its history couldn’t stir up enough emotions in a country sometimes known for its reserved people. 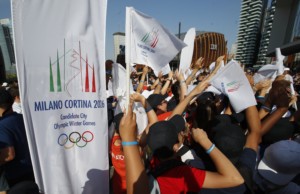 People celebrate after the announcement that the Italian bid of Milan-Cortina was voted by IOC members to host 2026 Winter Olympics, in Milan, Italy, Monday, June 24, 2019. Italy will host the 2026 Winter Olympics in Milan and Cortina d’Ampezzo. International Olympic Committee members voted for the Milan-Cortina bid over Stockholm-Are from Sweden that also included a bobsled track in Latvia. (AP Photo/Antonio Calanni)

“I think it’s really hard to get public support for anything in Sweden, especially for this,” Helene Hellmark Knutsson, a Swedish lawmaker and chair of the Stockholm sports council, told The Associated Press.

Knutsson joined other Swedish politicians and business leaders at Stockholm’s chamber of commerce on Monday evening for a live screening of the vote to host the 2026 Games, contested between Stockholm-Are and another shared bid from Milan and Cortina d’Ampezzo in Italy.

Sighs greeted the result that meant Italy would host a Winter Olympics for the second time in 20 years , after Turin in 2006, but many in Sweden will not lose sleep over it.

Polling from the International Olympic Committee in the lead-up to the vote found backing from local residents was only around 55% in Sweden, compared to 83% in Italy, and even Stockholm-Are bid chiefs had previously accepted that the Swedish mentality was to be questioning rather than supportive.

On a beautiful, sunny day in Stockholm, there was little sign that this was the day of the vote.

The announcement of the winning bid was broadcast on giant screens in Piazza Gae Aulenti in Milan, as well as in Piazza Angelo Di Bona in Cortina, and in Piazza Garibaldi in Sondrio, which is in the Valtellina region between Milan and Cortina. Branded gadgets and hats were distributed to spectators.

There was no public gathering in Stockholm.

“Swedes have been a little more reluctant than the Italians in terms of welcoming the games but I think that it (is) part of our culture,” Andreas Hatzigeorgiou, CEO of the chamber of commerce, told the AP after the result was announced. “We don’t jump into things with huge excitement before knowing the details first.”

It meant public support was lacking for a bid that only met with total political approval in the final weeks of the race, following government upheaval at local and national level over the past year. The Swedish population might have eventually got behind a home Olympics — a first since a summer games in 1912 — the closer it got to 2026 but now they won’t find out.

“I think we have to be more self-confident when we are in the start of the bid (process),” Knutsson said. “We had a very strong setup for the last presentation but the month before we could have been much stronger.”

Knutsson, who is a member of parliament for the Social Democrats, said IOC members went for the safe option — “what they already know” — of Italy rather than the kind of creative, cost-effective bid pushed by Stockholm-Are, which they felt was what the IOC said it wanted.

“I think that is a shame that, ultimately, they didn’t really want to go as far as they stipulated,” she said of the IOC.

Hatzigeorgiou said the result showed that sustainability — a big buzzword of the Swedish bid — “wasn’t enough.”

“Perhaps we are little bit before our time,” he said. “We believe that sustainability will become more important in the future and perhaps then we can apply and have the honor of organizing the games.”

Sweden, however, will likely think twice about bidding for that elusive Winter Games.

Make that eight failed bids, including a 1978 vote for the 1984 Winter Games and being briefly in the race for 2022 before pulling out.

It could be argued that Sweden was unlucky to stumble into a difficult political situation at home, with a new city government in Stockholm only formed in October — it never ended up being an official signatory to the hosting contract — and a minority national government coalition approved only in January after being in limbo for months.

Politicians belatedly got behind the bid.

The public never really did.