Tatis on HR tear vs LA during four-game series 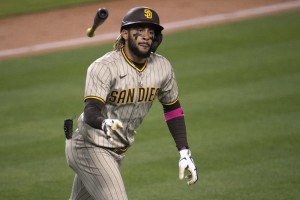 “It’s the biggest rivalry in baseball,” Tatís said Friday night. “Everybody can feel it. Everybody can see it.”

Tatis hit a leadoff homer and another solo shot off Trevor Bauer during San Diego’s 5-4 loss Saturday night to become the first opposing player with multi-homer games on consecutive nights at Dodger Stadium since San Francisco slugger Barry Bonds in 2002.

Joe Musgrove (2-2, 1.04 ERA) is 0-2 since pitching the first no-hitter in Padres history for his hometown team April 9 at Texas. He had a career-high 13 strikeouts over seven innings Monday in a 3-1 loss to Milwaukee.

Dustin May (1-1, 2.93) gets the ball for the defending World Series champions, who are missing injured slugger Cody Bellinger and several other regulars.