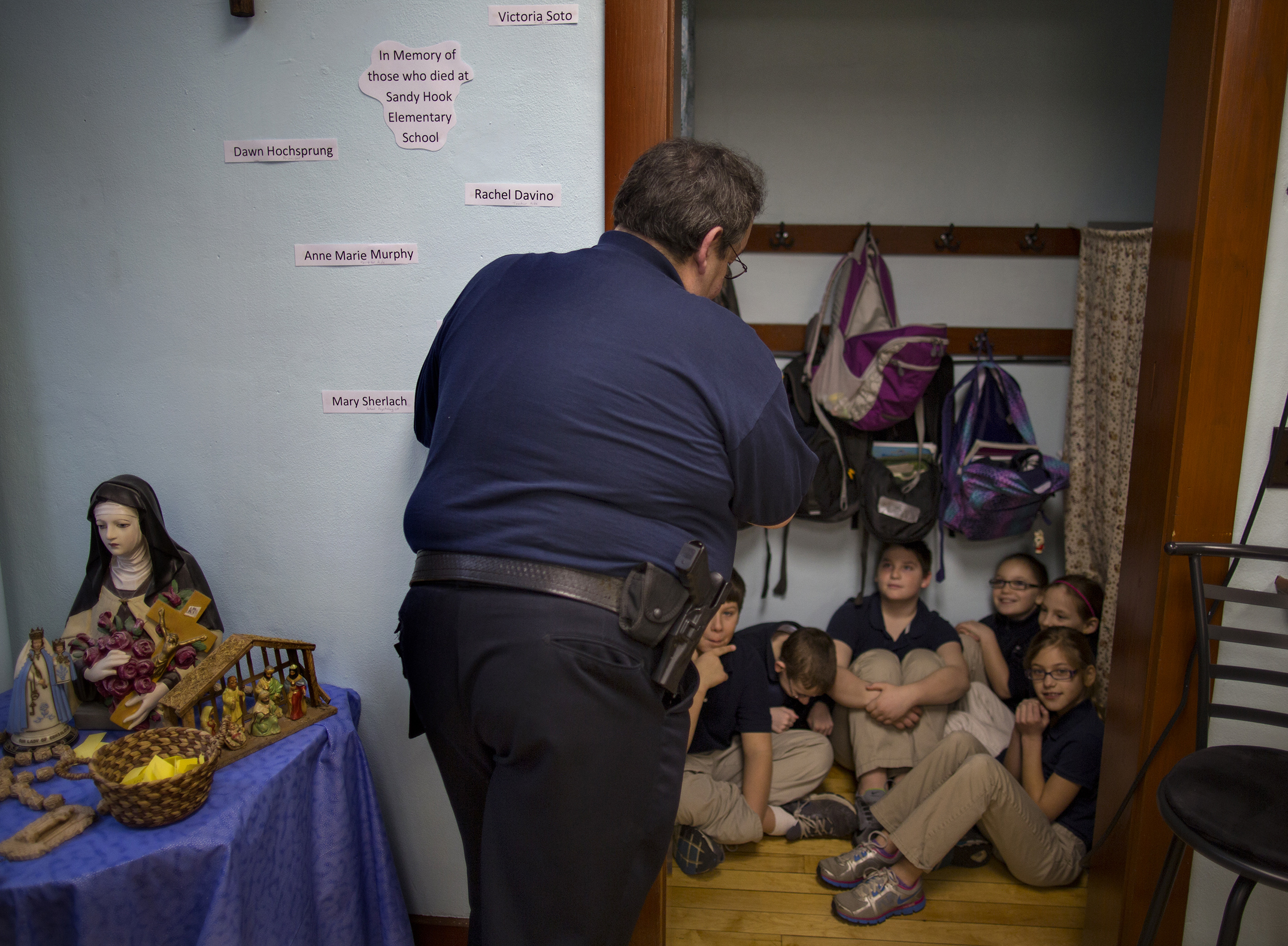 FILE – In this file photo of Jan. 14, 2013, New Washington, Ohio, Chief of Police Scott Robertson talks with fourth grade students as they huddle in closet a during a lockdown drill at the St. Bernard School in New Washington, Ohio, a month after the Sandy Hook Elementary School massacre in Newtown, Conn., that killed 26 people in December. Inspired by the memories of those who lost their lives, St. Bernard School’s principal decided to hold lockdown drills on the 14th of each month to refine a safety plan and increase school security. (AP Photo/Craig Ruttle, File)

HARTFORD, Conn. (AP) — The nation’s two largest teachers unions want schools to revise or eliminate active shooter drills, asserting Tuesday that they can harm students’ mental health and that there are better ways to prepare for the possibility of a school shooting.

The American Federation of Teachers and National Education Association joined with the advocacy group Everytown for Gun Safety Support Fund in calling for an end to unannounced drills or drills that simulate gun violence.

“Everywhere I travel, I hear from parents and educators about active shooter drills terrifying students, leaving them unable to concentrate in the classroom and unable to sleep at night,” said Lily Eskelsen Garcia, president of the National Education Association. “So traumatizing students as we work to keep students safe from gun violence is not the answer. That is why if schools are going to do drills, they need to take steps to ensure the drills do more good than harm.”

The report released Tuesday recommends schools concentrate on training teachers to respond to an active shooter incident rather than drilling students.

It also issued guidelines for schools that decide to use drills. Those include never simulating an actual shooting; giving parents, educators and students advance notice of any drill; working with mental health officials to create age-appropriate and trauma-informed drills; and tracking the effects of drills.

About 95% of schools drilled students on lockdown procedures in the 2015-16 school year, according to a survey by the National Center for Education Statistics.

“In Indiana they were shooting teachers with rubber pellets so they would feel the adrenaline of what a school shooting would feel like,” said Shannon Watts, founder of Moms Demand Action, which is part of Everytown. “In California recently, a superintendent hired a stranger to wear a mask to rattle the doors of classrooms without letting faculty and students know. We’ve seen students asked to pretend to be victims and lie down using fake blood in the hallway.”

Jean-Paul Guilbault, the chief executive of the Alice Training Institute, which runs active shooter drills, said they are effective when done appropriately. He said his company never runs surprise drills but believes that simulating an event is the best way to prepare for one “and allow students to practice their options, whether that be lockdown or evacuation.”

“According to a recent study conducted by The U.S. Secret Service, most school shootings last for two minutes or less, and nearly half of the events studied ended within one minute,” he said in a written statement. “That means it is up to us to keep ourselves safe for those seconds that will feel as slow as a lifetime. We drill so everyone has a plan when faced with danger, to give people a chance at survival.”

But Abbey Clements, who was teaching second grade at the Sandy Hook school in Newtown when a gunman killed 26 people in 2012, said she doesn’t believe a drill would have saved lives there.

“Our students knew what to do,” said Clements, who now teaches at another elementary school in town. “We taught them what to do in an emergency. We knew evacuation routes and where a safe spot was in the room, where nobody could see inside. But frightening students with some type of active drill, I think that is barbaric. There is no way you could possibly be prepared for the infinite number of ways that a shooting could go down with these weapons of war.”

Clements, an active member of Moms Demand Action, said it breaks her heart when she hears stories like the one about a little girl who refused to wear light-up shoes after a drill, because she was told it could make her an easier target.

“I’ve got kids at the elementary school level who tell me they have to keep a cell phone on them at all times, just in case,” she said. “It should not be like that.”

Sunroad Auto Group to give away new vehicles for unsung heroes

The Latest: UN body calls for action on debt amid pandemic