WASHINGTON (AP) — The Latest on the House Judiciary Committee and Don McGahn (all times local):

Donaldson was a top aide to former White House Counsel Donald McGahn, who on Tuesday defied a subpoena from the committee to testify. Trump had directed McGahn not to appear.

McGahn was a key figure in special counsel Robert Mueller’s investigation, describing ways in which the president sought to curtail that probe.

The subpoenas come as Democrats debate how to respond to Trump’s declaration that he will fight “all of the subpoenas” from Congress. 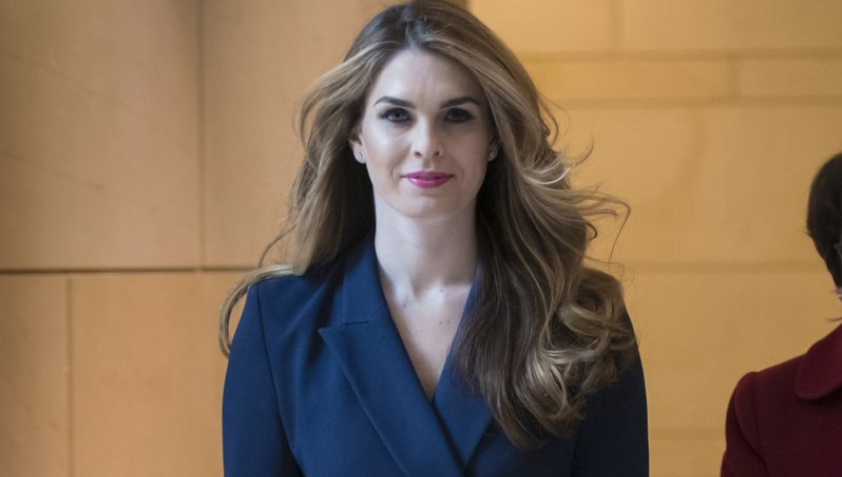 In this Feb. 27, 2018 photo, White House Communications Director Hope Hicks, one of President Trump’s closest aides and advisers, arrives to meet behind closed doors with the House Intelligence Committee, at the Capitol in Washington. Hicks has been hired at the new Fox company being created by the shedding of many of 21st Century Fox’s entertainment assets to the Walt Disney Co. Hicks, who left the White House on March 29, will be based in Los Angeles. (AP Photo/J. Scott Applewhite, File)

So even though I didn’t have to do it with Presidential Privilege, I allowed everyone to testify, including White House Counsel Don McGahn (for over 30 hours), to Robert Mueller and the 18 Angry Trump-Hating Democrats, and they arrived….

….at a conclusion of NO COLLUSION and NO OBSTRUCTION! The Dems were unhappy with the outcome of the $40M Mueller Report, so now they want a do-over.

More Democrats are calling for impeachment proceedings against President Donald Trump after he blocked his former White House lawyer from testifying before the House Judiciary Committee on Tuesday.

A growing number of rank-and-file House Democrats, incensed by former counsel Don McGahn’s empty chair in the hearing room, are pushing House Speaker Nancy Pelosi and other leaders to act. Their impatience is running up against the speaker’s preference for a more methodical approach, including already-unfolding court battles.

Pelosi has summoned them to a meeting Wednesday to assess strategy.

Some other Democratic leaders, while backing Pelosi, signaled that a march to impeachment may at some point become inevitable.

Majority Leader Steny Hoyer says if a House inquiry “leads to other avenues including impeachment … so be it.”

The ranking Republican on the House Judiciary Committee, Rep. Doug Collins, says Democrats are “trying desperately to make something out of nothing.”

Collins spoke at a hearing Tuesday, where the panel’s chairman, Rep. Jerrold Nadler, issued a stern warning that former White House Counsel Don McGahn would be held in contempt for defying a congressional subpoena and failing to appear before the committee.

Nadler said that if McGahn doesn’t “immediately correct his mistake” in not showing, the committee will have to enforce the subpoena. McGahn was a key witness in special counsel Robert Mueller’s Russia investigation.

Collins called the session a “circus” and said Democrats preferred a public “fight over fact-finding.”

The committee voted to adjourn the hearing immediately after Collins’ remarks.

The Judiciary panel is holding a brief hearing Tuesday in McGahn’s absence with an empty chair where he was supposed to sit. Nadler said that if McGahn doesn’t “immediately correct his mistake” in not showing, the committee will have to enforce the subpoena.

Nadler has said the committee is ready to hold McGahn in contempt. The committee will hear McGahn’s testimony, “even if we have to go to court,” Nadler said.

Georgia Rep. Doug Collins, the committee’s top Republican, said it’s time to move on. He said Nadler wants “the fight and the drama.”

Former White House Counsel Donald McGahn is a no-show at a hearing of the House Judiciary Committee, defying a subpoena for his testimony.

President Donald Trump directed McGahn to ignore the committee’s subpoena to testify on Tuesday. A lawyer for McGahn said he would follow the president’s directive.

House Judiciary Committee Chairman Jerrold Nadler said the committee will vote to hold McGahn in contempt of Congress if he did not testify. It is one of several actions against current and former members of the administration as Trump has said he will fight “all of the subpoenas.”

McGahn was a key witness in the investigation of special counsel Robert Mueller.

House Democrats are facing yet another attempt by President Donald Trump to stonewall their investigations, this time with former White House counsel Donald McGahn defying a subpoena for his testimony on orders from the White House.

A lawyer for McGahn says he will follow the president’s directive and skip a House Judiciary hearing Tuesday, leaving the Democrats without yet another witness — and a growing debate about how to respond.

House Speaker Nancy Pelosi, backed by House Judiciary Committee Chairman Jerrold Nadler, is taking a step-by-step approach to the confrontations with Trump. Nadler says the committee will vote to hold McGahn in contempt, and take the issue to court.

Nadler warned McGahn on the eve of the hearing that he faces serious consequences if he doesn’t appear.