WASHINGTON (AP) — The Latest on the presidential campaign (all times local):

Joe Biden is offering a hopeful call for healing in the face of the “lasting wound” the coronavirus pandemic has left on the country.

In Warm Springs, Georgia, the Democratic presidential nominee spoke Tuesday of the need for the nation to come together to address its challenges and overcome division. Biden asked if the heart of the nation “turned to stone,” and replied: “I don’t think so. I refuse to believe it.”

Biden spoke to an extremely small crowd, compared to the tens of thousands that show up to President Trump’s many campaign rallies.

Joe Biden walks to the stage for campaign speech in Warm Springs, GA.

With just a week left until Election Day, Biden is making his closing pitch to the nation with a message focused on unity and a call to rise above the division he says President Donald Trump has sown while in office. It’s a message with which Biden launched his campaign in May 2019, and it’s one he’s returned to again and again as he’s sought to draw a contrast with Trump.

Previously, Biden’s last major speech on the theme of unity was held at Gettysburg, Pennsylvania, in early October. His setting Tuesday was intentional as well: Warm Springs was home to Franklin D. Roosevelt’s private retreat and where he came to recover from polio. Biden made reference to the history made there under Roosevelt, saying the site was “a reminder that, though broken, each of us can be healed” and the country “can overcome this devastating virus” and “heal a suffering world.”

Biden’s full speech was streamed on his Twitter page, you can watch it here.

With one week left until Election Day, I'm delivering remarks in Warm Springs, Georgia, on how we can unite to address the crises facing our nation. Tune in. https://t.co/A5DxgXbbAB

HERE’S WHAT YOU NEED TO KNOW ABOUT THE PRESIDENTIAL RACE:

— Biden goes on offense in Georgia while Trump targets Midwest

— Push is on in Wisconsin to return 320K outstanding ballots

— Barrett sworn in at court as issues important to Trump await

— Voters in some states unable to cast early ballots in person

HERE’S WHAT ELSE IS GOING ON:

President Donald Trump and first lady Melania Trump have departed the White House for a long day of campaigning in separate battleground states.

The first lady is headed to Pennsylvania for her first solo campaign event this year. Meanwhile, the president will be in Michigan, Wisconsin and Nebraska.

Trump is expected to easily win Nebraska, but it’s possible that Democratic presidential nominee Joe Biden could pick up one electoral vote by winning the Omaha-based congressional district.

Nebraska and Maine each award some of their Electoral College votes by congressional district, unlike all other states that give them with a winner-take-all system.

Trump also notes that the Omaha visit could help him make his case to some voters in the battleground state of Iowa.

In a close race, just one electoral vote could make the difference.

Joe Biden is making a late push to flip Georgia, a state Democrats haven’t won at the presidential level in nearly three decades.

Biden is visiting Warm Springs, Georgia, to deliver a speech that aides have said will drive his closing argument, focused on the need for the nation to unify to confront its major challenges. The town was the site of Franklin D. Roosevelt’s private retreat.

Later Tuesday, he’s speaking at a drive-in rally in Atlanta.

Georgia hasn’t voted for a Democrat in a presidential race since 1992. But the Biden campaign is looking to capitalize on the favorable political environment there as the coronavirus pandemic drags down President Donald Trump in typically red-leaning states. Sen. Kamala Harris, Biden’s running mate, campaigned in the state last Friday.

While the Biden campaign insists the candidate is still focused on winning back the “Blue Wall” states of Michigan, Pennsylvania and Wisconsin, they’ve also made moves in recent weeks to expand the map to traditionally Republican states.

Biden will also visit Iowa this week, another state once seen as a reach for Democrats that has become more competitive. 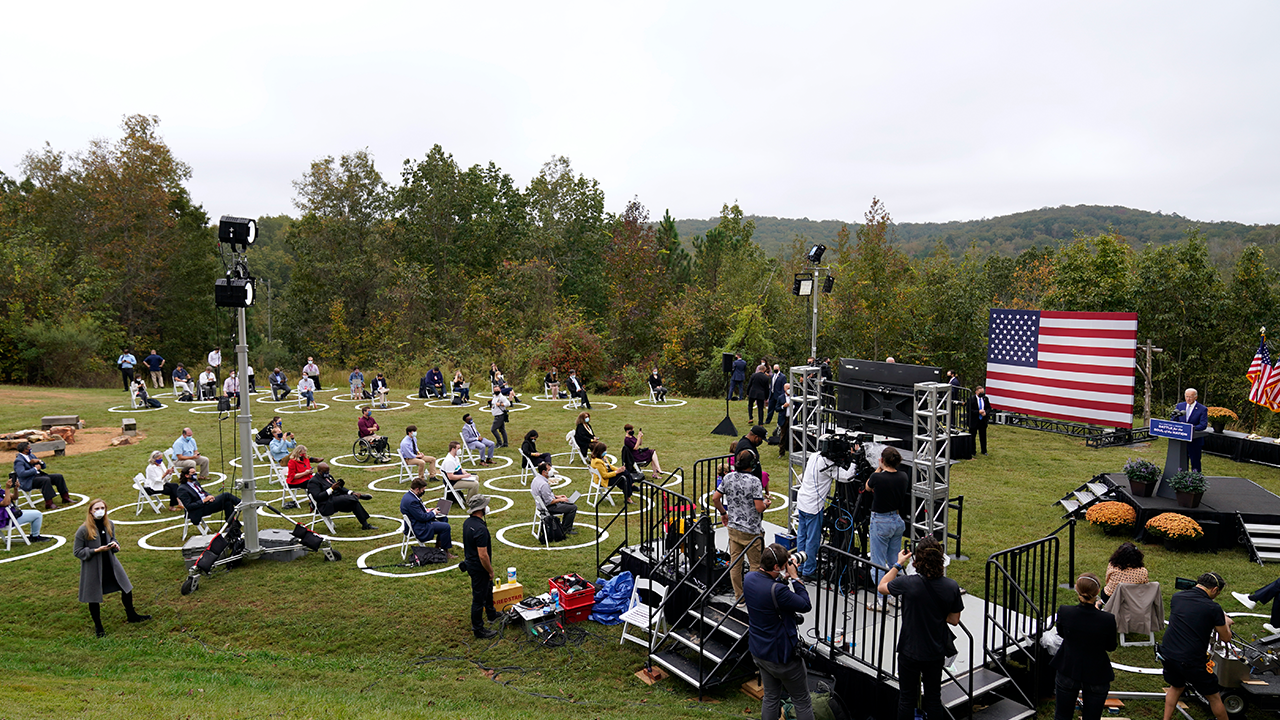