BERLIN (AP) — Thousands protested Germany’s coronavirus restrictions Saturday in a Berlin demonstration marking what organizers called “the end of the pandemic” — a declaration that comes just as authorities are voicing increasing concerns about an uptick in new infections.

With few masks in sight, a dense crowd marched through downtown Berlin from the Brandenburg Gate.

Protesters who came from across the country held up homemade signs with slogans like “Corona, false alarm,” “We are being forced to wear a muzzle,” “Natural defense instead of vaccination” and “We are the second wave.” 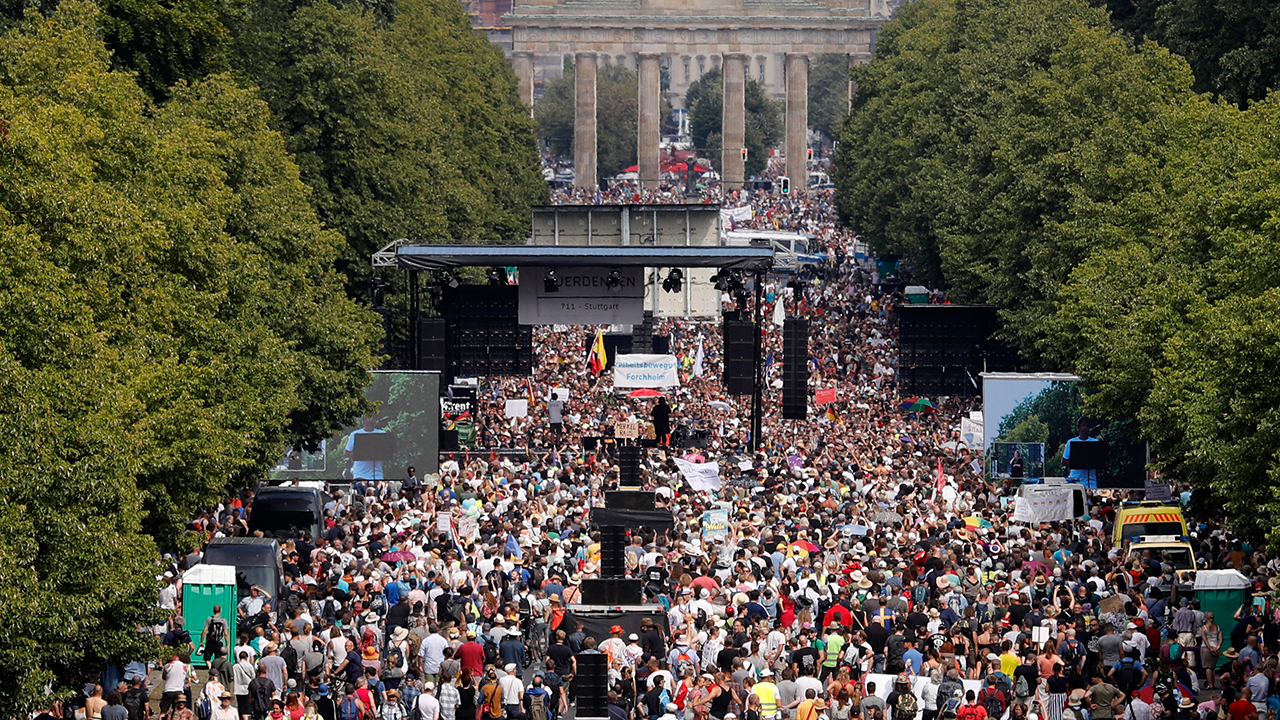 People gather for a demonstration with the slogan â€šThe end of the pandemic – freedom day’ – against coronavirus restrictions in Berlin, Germany, Saturday, Aug. 1, 2020. It comes amid increasing concern about an upturn in infections in Germany. (AP Photo/Markus Schreiber)

They chanted, “We’re here and we’re loud, because we are being robbed of our freedom!”

Police used bullhorns to chide participants to adhere to social distancing rules and to wear masks, apparently with little success. They tweeted that they drew up a criminal complaint against the rally’s organizer for failing to enforce hygiene rules, then said shortly afterward that the organizer had ended the march.

Police estimated about 17,000 people turned out. The demonstrators were kept apart from counterprotesters, some of whom chanted “Nazis out!”

Protesters continued to a subsequent rally on a boulevard running through the city’s Tiergarten park, which police estimated drew 20,000 people. Police declared that event over as organizers again failed to get demonstrators to wear masks or keep their distance.

Protests against anti-virus restrictions in Germany have drawn a variety of attendees, with many different ideological beliefs.

Unlike the U.S., Brazil and Britain, Germany’s government has been praised worldwide for its management of the pandemic. The country’s death toll — just over 9,150 people out of more than 210,670 confirmed virus cases as of Saturday — is five times less than Britain’s, which has a smaller population.

The German government has been easing lockdown measures since late April but social distancing rules remain, as does a requirement to wear masks on public transit and in shops.

Officials have been warning against complacency as the number of new COVID-19 cases has crept up recently. Amid concerns about residents bringing home infections from summer trips abroad, officials introduced free tests for people entering the country.

“Thousands of #covidiots are celebrating themselves in Berlin as ‘the second wave,’ without distancing, without masks,” tweeted Saskia Esken, a co-leader of the Social Democrats, the junior party in Germany’s governing coalition.

“They are not just endangering our health, they are endangering our success against the pandemic and for the revival of the economy, education and society. Irresponsible!”

SDSU reports another 25 cases of COVID-19