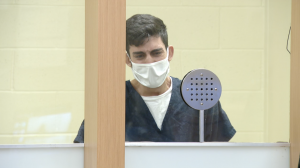 SAN DIEGO (KUSI) – A social media personality accused of fatally shooting his wife and another man at an East Village high-rise apartment building appeared in court Friday for a hearing to determine whether he will stand trial on murder charges.

Abulaban, who went by the handle JinnKid on various social media platforms, is charged with two counts of first-degree murder, allegations of using a handgun in the slayings, and a special-circumstance allegation of committing multiple murders, meaning he could face the death penalty if convicted and prosecutors choose to pursue capital punishment. 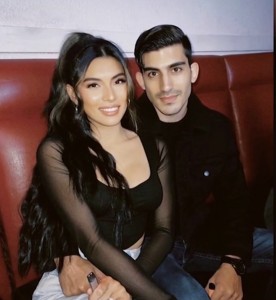 His preliminary hearing, which is estimated to last two days, will resume Monday with further testimony at the downtown San Diego courthouse.

Police were called around 3:10 p.m. that day and found the victims dead in the living room of a unit on the 35th floor of the complex on Island Avenue, according to police.

With his 5-year-old daughter in the car, Abulaban was stopped by police later that day near the interchange of the 805 and 15 freeways.

SDPD Det. Sgt. Christopher Leahy testified Friday afternoon that Abulaban called 911 following the shooting, telling a dispatcher that he arrived at the apartment and found both victims dead.

When the dispatcher asked him to remain at the scene, Abulaban “said he had to go” and ended the call, Leahy testified.

At Abulaban’s arraignment, Deputy District Attorney Taren Brast said Ana Abulaban was attempting to leave the marriage, in part due to a prior domestic violence incident in which her husband pushed her.

Leahy testified that nine prior calls for service were made to the couple’s apartment since July of 2021. Abulaban was not arrested in connection with any of those incidents.

Prosecutors say Ana Abulaban asked her husband to move out of their apartment, but according to testimony, he secretly made a copy of the apartment key.

He allegedly later told investigators that while his wife was away on the morning of Oct. 21, he used the copied key to enter the apartment, vandalized the unit, then installed an app on his daughter’s iPad that allowed him to monitor live audio inside the apartment.

While listening to the app later that day, he overheard his wife and a man “giggling,” Leahy testified, then drove to the complex from a Mission Bay hotel where he was staying.

According to Leahy, Abulaban told police that upon entering the apartment, he saw Barron and his wife sitting on the couch, and Barron had his arm around Ana. Abulaban said he then shot both victims, shortly after entering the unit, Leahy testified.

After allegedly fleeing the scene, Abulaban picked his daughter up from her school and at some point told her that he “hurt Mommy,” Brast said at Abulaban’s arraignment.

Along with what he allegedly told detectives, prosecutors say he confessed to committing the shooting to his mother in a phone call.