But are these numbers meaningful and will increased ridership on Free Ride Day translate to increased daily commuters?

During our experiences using MTS, we have noticed that there is no one checking people’s tickets on the trolley. KUSI viewers have reached out with their concerns, many of them citing how long it takes to get to their office or destination. Others, mainly those who work downtown, told us using transit to get their actually does save them time.

If you remember, last week KUSI’s Hunter Sowards tested out our city’s public transportation from the E Street Transit Center to KUSI in Kearny Mesa and we followed her throughout her journey with live updates on Good Morning San Diego.

This time, Sowards will travel from Poinsettia Station in Carlsbad, to KUSI with live updates on social media and on Good Morning San Diego. KUSI Digital Content Manager Mike McKinnon III,  dropped off Hunter and Photographer Scott Nunes at the transit station and drove back to KUSI at the same time so we could compare both travel times. 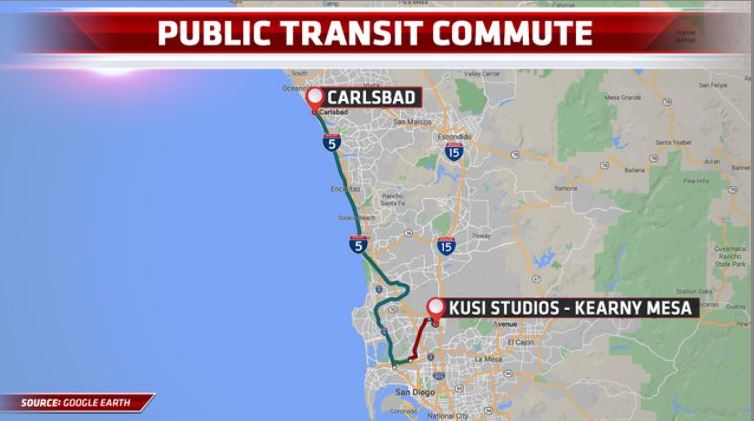 Who will be the winner this week? #tryingtransit Mikey just dropped us off and hit the road as we hit the #coaster tracks! pic.twitter.com/TnDpGUhfWe

During Hunter’s second check in on Good Morning San Diego just before 8 a.m., she was on the Coaster near University City and McKinnon was on the I-5 South passing Carmel Valley Road in Del Mar.

Just about 41 minutes after leaving Poinsettia Station, McKinnon arrived at the KUSI News studio. He experienced traffic in the beginning of his drive, but from the Lomas Santa Fe exit and on, the roads were clear. He took the I-5 South and took the I-805 South to the SR-52 East. From there he merged onto the I-15 South and exited Balboa Ave where KUSI is located.

41 minutes after departing Poinsettia Station in Carlsbad, @MikeMcKinnonIII has arrived at #KUSINews in Kearny Mesa.

While @HunterSowards3 is just about to get off the @GoNCTD Coaster in Old Town. She will hop on a trolley, and then a bus. Expected arrival in about an hour. pic.twitter.com/SUvVK0lp1u

Mikey might have already beat us back to the station but I must say this view has to be factored into making a commute more enjoyable (even if it’s slower) #takingtransit pic.twitter.com/YpsB1EoqGV

At the beginning of the 9 am hour, we checked in again with Hunter as she was on an MTS bus driving down Friars Rd in Mission Valley. At this moment, she was just over an hour and a half into her trip. She spoke to some people who said they take the train from North County train stations to downtown, they told her it takes slightly longer than driving, but they save money on gas and parking so they believe it is well worth it.

And finally, 2 hours & 20 minutes later, Hunter Sowards arrived at KUSI News. They didn’t stop for anything, but had to wait around 20 minutes for the bus after getting off the trolley and then the bus drivers had to switch. Beside that it was a smooth, but time consuming, trip to Kearny Mesa.

She joined KUSI’s Paul Rudy & Lauren Phinney on set to tell us all about her commute.