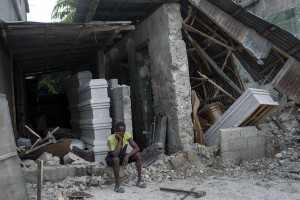 A man sits in front of a collapsed funeral home in Les Cayes, Haiti, Monday, Aug. 16, 2021, two days after a 7.2-magnitude earthquake struck the southwestern part of the country. (AP Photo/Matias Delacroix)

The storm on Monday added to the misery of the thousands of people who lost loved ones, were injured or became homeless.

The country’s southwestern area was hit the hardest by Saturday’s earthquake.

It began to see heavy rain and strong winds after nightfall, and officials warned that rainfall could reach 15 inches in some areas.

The storm arrived as officials raised the earthquake’s death toll to 1,419.