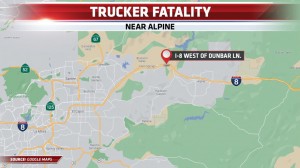 HARBISON CANYON (KUSI) – The driver of a flatbed big rig was killed Tuesday when several large steel beams he was hauling through eastern San Diego County slid forward during an abrupt deceleration, smashed their way into the cab of the vehicle and slammed into him.

The man slowed abruptly for unknown reasons while headed east on Interstate 8 just west of Dunbar Lane in Harbison Canyon shortly before 3 p.m., according to the California Highway Patrol.

The sudden braking caused the improperly secured industrial cargo the truck was hauling — steel sheet piles, a type of heavy-duty interlocking girders used to construct retaining walls and other large barriers — to hurtle forward and penetrate the back of the driver’s compartment of the tractor- trailer.

The unidentified victim was impaled by the metal and died at the scene, CHP public affairs Officer Travis Garrow said.

There were no immediate indications that any other vehicles were involved in the wreck, which left one of the two eastbound lanes of the freeway blocked in the area into the early evening, Garrow said.