SACRAMENTO, Calif. (AP) — The California Trucking Association on Tuesday filed what appears to be the first lawsuit challenging a sweeping new labor law that seeks to give wage and benefit protections to workers in the so-called gig economy, including rideshare drivers at companies such as Uber and Lyft.

The legislation violates federal law and would deprive more than 70,000 independent truckers of their ability to work, the association said. Many would have to abandon $150,000 investments in clean trucks and the right to set their own schedules in order for companies to comply with a law it says illegally infringes on interstate commerce.

“Independent truckers are typically experienced drivers who have previously worked as employees and have, by choice, struck out on their own. We should not deprive them of that choice,” association CEO Shawn Yadon said in a statement.

The law set to take effect Jan. 1 makes it harder for companies to classify workers as independent contractors instead of employees, who are entitled to minimum wage and benefits such as workers compensation. 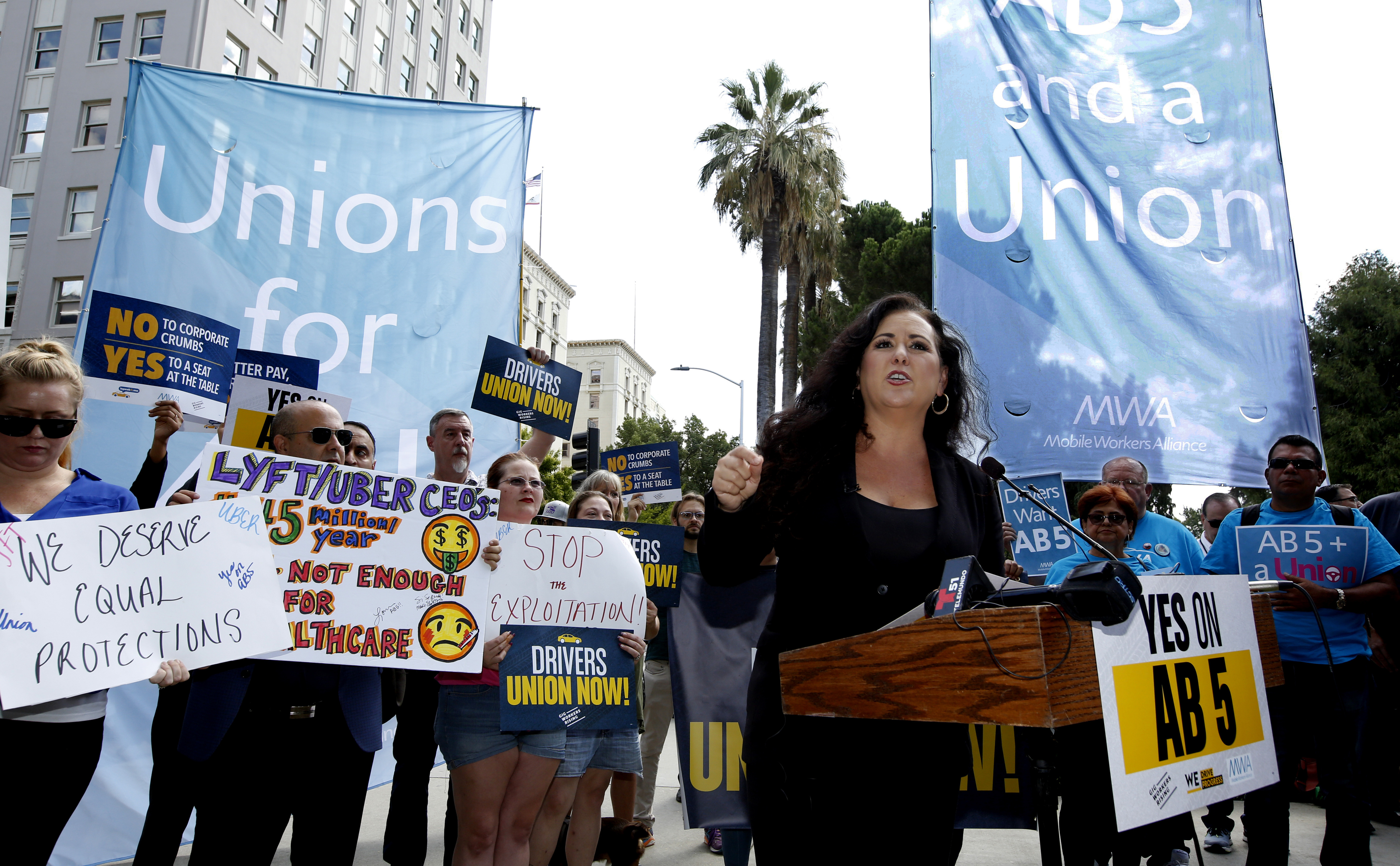 Assemblywoman Lorena Gonzalez, D-San Diego, speaks at rally calling for passage of her measure to limit when companies can label workers as independent contractors at the Capitol in Sacramento, Calif., Wednesday, Aug. 28, 2019. If approved by the legislature and signed by Gov. Gavin Newsom, AB5, would require companies like Uber and Lyft to treat their drivers like employees. (AP Photo/Rich Pedroncelli)

“We expect big corporate interests — especially those who have misclassified their workers for years — to take this fight back to the place they know they can delay justice for workers: the courts,” the bill’s author, Democratic Assemblywoman Lorena Gonzalez of San Diego, said in a statement.

Her office said it’s apparently the first such lawsuit, although Uber, Lyft and DoorDash have said they will spend $90 million on a 2020 ballot measure opposing the law if they can’t negotiate other rules for their drivers. Uber also said it will keep treating its drivers as independent contractors and defend that decision in court if needed.

The law could also affect construction workers, janitors and home health aides. But the law’s effect on ridesharing and meal delivery drivers has received the most attention because those companies pay their drivers on a per-ride basis and don’t provide benefits such as health insurance and paid leave.

The law implements a legal ruling last year by the California Supreme Court regarding workers at the delivery company Dynamex.

The court set a new, three-prong test for companies to use when determining how to classify their workers. To be labeled a contractor, a worker must be free from control of the company; performing work “outside the usual course of the hiring entity’s business”; and engaged in an independently established trade, occupation or business of the same nature as the work they are performing.

The lawsuit was filed in federal court in San Diego the same day the University of California, Berkeley, Labor Center estimated that the law will apply to nearly two-thirds of independent contractors, including truck and taxi drivers, janitors and maids, retail workers, grounds maintenance workers and childcare workers.

Categories specifically exempted under the law make up another 9%, mostly high-wage jobs including doctors and dentists, lawyers, accountants and real estate agents.

Roughly a quarter of workers will be covered unless certain strict criteria apply, the center projected. They include construction workers, hairdressers and barbers, designers and other artists, and sales representatives.