NEW YORK (AP) — Twitter blocked a post Sunday from an adviser to President Donald Trump who suggested that masks do not work to stop the spread of the coronavirus.

Scott Atlas, who joined the White House in August as a science adviser, had tweeted “Masks work? NO,” and said widespread use of masks is not supported. 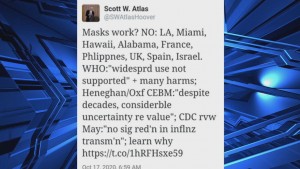 “I don’t understand why the tweets were deleted,” Atlas said in an email, calling Twitter’s actions censorship. He said his tweet was intended to show that “general population masks and mask mandates do not work,” and he clarified that the correct policy is to use masks when one cannot socially distance. Atlas added that infections exploded even with mandates in Los Angeles County, Miami-Dade County, Hawaii, Alabama, the Philippines, Japan and other places.

The coronavirus task force member, and Adviser to the President, Dr. Scott Atlas,  joined KUSI’s Good Morning San Diego to discuss the censorship of his tweet. Atlas said, “I am talking about I’m talking about mask mandates and universal mask-wearing and I stand by that completely because I am giving the facts.”