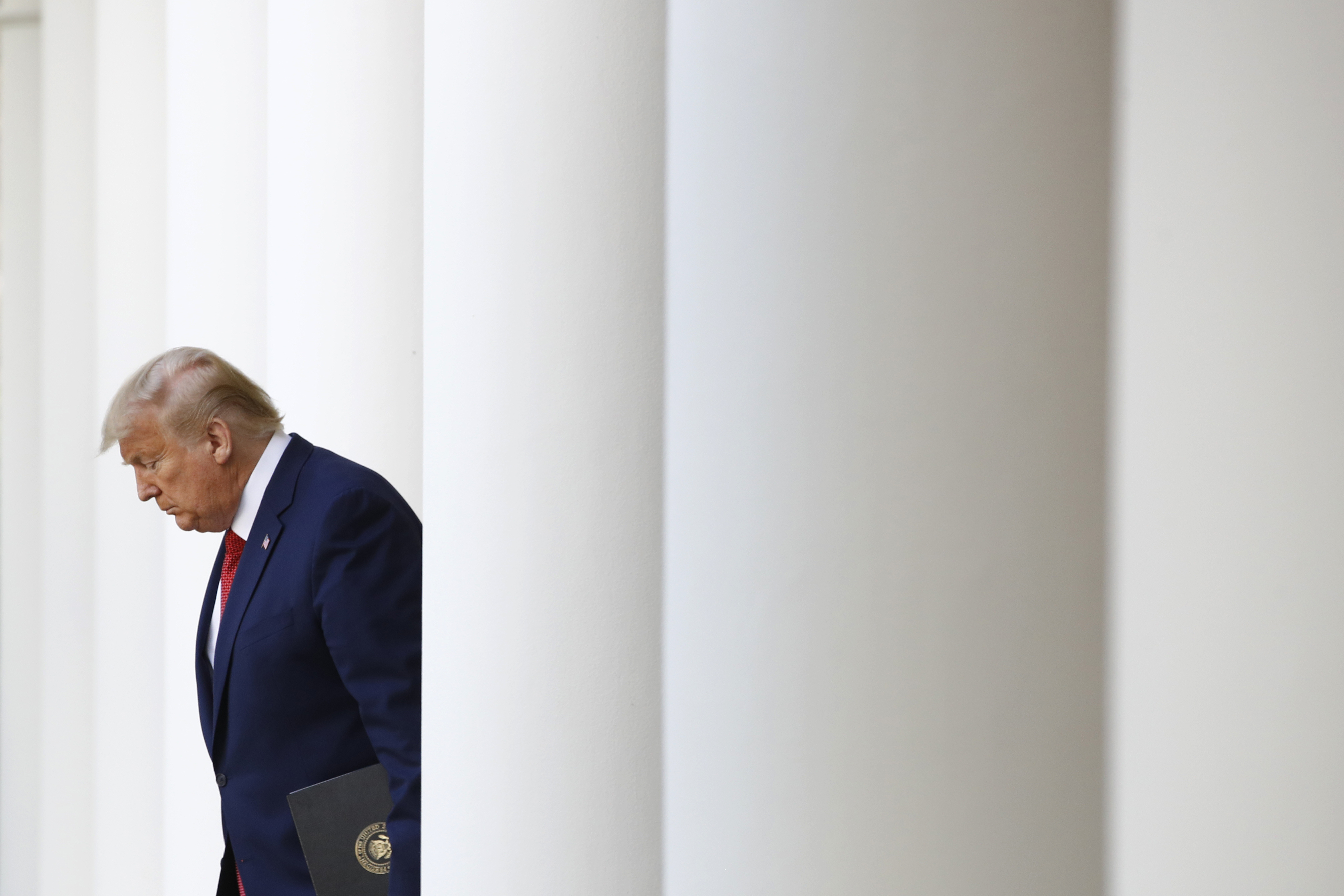 WASHINGTON (AP) — Bracing the nation for a coronavirus death toll that could exceed 100,000 people, President Donald Trump extended restrictive social distancing guidelines through April, bowing to public health experts who presented him with even more dire projections for the expanding coronavirus pandemic.

It was a stark shift in tone by the Republican president, who only days ago mused about the country reopening in a few weeks. From the Rose Garden, he said his Easter revival hopes had only been “aspirational.”

The initial 15-day period of social distancing urged by the federal government expires Monday, and Trump had expressed interest in relaxing the national guidelines at least in parts of the country less afflicted by the pandemic. He instead decided to extend them through April 30, a tacit acknowledgment he’d been too optimistic. Many states and local governments have stiffer controls in place on mobility and gatherings.

Trump’s impulse to reopen the country met a sober reality check Sunday from Dr. Anthony Fauci, the government’s top infectious disease expert, who said the U.S. could experience more than 100,000 deaths and millions of infections from the pandemic. That warning hardened a recognition in Washington that the struggle against the coronavirus will not be resolved quickly even as Trump expressed a longing for normalcy.

Trump told “Fox and Friends” in an interview Monday morning that “nobody” was “more worried” about the economic impact on the country than him, but said, “We want to do something where we have the least death.”

Trump, who has largely avoided talk of potential death and infection rates, cited projection models that said potentially 2.2 million people or more could have died had social distancing measures not been put in place. And he said the country would be doing well if it “can hold” the number of deaths “down to 100,000.” He said the best case for the country would be for the death rate to peak in about two weeks.

“It’s a horrible number,” Trump said, but added, “We all together have done a very good job.”

Brought forward by Trump at the outdoor briefing, Fauci said his projection of a potential 100,000 to 200,000 deaths is “entirely conceivable” if not enough is done to mitigate the crisis.

“It would not have been a good idea to pull back at a time when you really need to be pressing your foot on the pedal as opposed to on the brakes,” Fauci said on CNN on Monday, describing how he and others had convinced Trump to extend the restrictions.

“We showed him the data. He looked at the data. He got it right away,” Fauci said. “It was a pretty clear picture. Dr. Debbie Birx and I went in to the Oval Office and leaned over the desk and said, ‘Here are the data. Take a look.’ He just shook his head and said, ‘I guess we got to do it.’”

“His first goal is to prevent suffering and death,” Fauci added. “And we made it clear to him that if we pulled back on what we were doing … there would be more avoidable suffering and avoidable death. So it was a pretty clear decision on his part.”

Americans are now being called on to prepare for another 30 days of severe economic and social disruption, as schools and businesses are closed and public life is upended. One in 3 Americans remain under state or local government orders to stay at home to slow the spread of the virus.

Trump acknowledged that he may be forced to extend the guidelines again at the end of April, but expressed hope that by June 1, “we should be well on our way to recovery.”

The federal guidelines recommend against group gatherings larger than 10 and urge older people and anyone with existing health problems to stay home. People are urged to work at home when possible and avoid restaurants, bars, non-essential travel and shopping trips.

For more than a week, Trump had been bombarded by calls from outside business leaders who urged him to begin re-opening the nation’s economy and warned of catastrophic consequences that could damage his re-election chances if it remained shuttered for much longer.

“The president is right. The cure can’t be worse than the disease, and we’re going to have to make some difficult trade-offs,” Trump’s top economic adviser Larry Kudlow had said last Monday, reflecting the thinking of his economic team.

That talk alarmed health experts, who urged Trump to keep encouraging people to stay home. The virus was still spreading, with the peak still weeks away, the experts warned.

In the end, Trump, in the face of dire projections and increasingly alarming images out of New York, sided with his health experts and backed off the idea of loosening recommended restrictions on less impacted parts of the country.

“They’re the best in the profession and they didn’t like that idea,” he said of Fauci and Dr. Deborah Birx, head of the White House coronavirus task force.

Trump was clearly moved by the scenes from New York, particularly hard-hit Elmhurst Hospital in his native Queens.

“I’ve been watching that for the last week on television,” he said. ”Body bags all over, in hallways. I’ve been watching them bring in trailer trucks — freezer trucks, they’re freezer trucks, because they can’t handle the bodies, there are so many of them. This is essentially in my community, in Queens, Queens, New York,” he continued. “I’ve seen things that I’ve never seen before.”

Phasing out the recommendations would have been a symbolic nod to business and an affront to public health experts, but may have had little practical impact. States across the country already have their own restrictions in place that, in many cases, are far stricter than the administration’s, and those would have remained in place.

Birx and Fauci said even those areas yet to face a significant outbreak must prepare for the eventuality that they will.

“Certainly we’re hoping that there aren’t more New York cities and New York metro areas around the country, but we have to plan for that,” Birx said on CBS on Monday, calling on cities across the country to make preparations.

“It’s critical that even if you don’t see it, it could be circulating in your community,” she said.

Fauci said on ABC’s “Good Morning America” that smaller U.S. cities are now ripe for the kind of acceleration that has occurred in New York.

“If you look throughout the country there are a number of smaller cities that are sort of percolating along, couple hundred cases, the slope doesn’t look like it’s going up,” Fauci said. “It looks like it’s low level, it starts to accelerate, then it goes way up.”

The U.S. had more than 140,000 COVID-19 cases reported by Monday morning, with more than 2,500 deaths. During the course of the Rose Garden briefing, reported deaths grew by several dozen and the number of cases by several thousand.

Most people who contract COVID-19 have mild or moderate symptoms, which can include fever and cough but also milder cases of pneumonia, sometimes requiring hospitalization. The risk of death is greater for older adults and people with other health problems. Hospitals in the most afflicted areas are straining to handle patients and some are short of critical supplies.

Fauci’s prediction would take the death toll well past that of the average seasonal flu. Trump repeatedly cited the flu’s comparatively much higher cost in lives in playing down the severity of this pandemic.

Trump’s change in tone was previewed Saturday, when the president suggested then backed away from instituting an “enforceable” quarantine of hard-hit New York, Connecticut and New Jersey. Instead, the White House task force recommended a travel advisory for residents of those states to limit non-essential travel to slow the spread of the virus to other parts of the U.S.

The quarantine notion was strongly opposed by the governors of those states, who argued it would cause panic.

Even as he opted against the quarantine, Trump on Sunday suggested without evidence that hospitals and hospital systems were “hoarding” ventilators and other medical supplies that were needed in other areas of the state. He also encouraged the Food and Drug Administration to streamline approvals for companies seeking to sanitize badly needed respirators so they can be reused.

For weeks, Trump minimized the gravity of the pandemic, and House Speaker Nancy Pelosi on Sunday accused Trump of “denial” in the crisis and called it “deadly.”

Asked whether she believes that attitude cost American lives, Pelosi told CNN: “Yes, I am. I’m saying that.”

Trump, asked about the comments on Fox Monday morning, lashed back.

“She’s a sick puppy in my opinion,” Trump said. “I think it’s a disgrace to her country, her family”

Former Vice President Joe Biden, the likely Democratic presidential nominee, said he wouldn’t go so far as to lay the blame for deaths on the president. “I think that’s a little too harsh,” he told NBC.

Trump nonetheless hit back. “If sleepy Joe was president,” he told Fox, “he wouldn’t even know what’s going on.”