Trump is “too busy” to watch impeachment hearings; meets with Erdogan at the White House

WASHINGTON (AP) — Professing disinterest, President Donald Trump said Wednesday he was “too busy” doing the people’s business to watch the impeachment hearings that imperil his presidency. But even as Trump tried to suggest he was above the fray, the president tweeted two dozen times before noon laying out his grievances about the process playing out on the opposite end of Pennsylvania Avenue.

And Trump took a swipe at one of his political foes as he sat next to another world leader in the Oval Office.

“It’s a witch hunt, it’s a hoax, I’m too busy to watch it,” Trump told reporters. “There’s nothing there. I see they’re using lawyers that are television lawyers, they took some guys off television. You know, I’m not surprised to see it, because Schiff can’t do his own questions.” 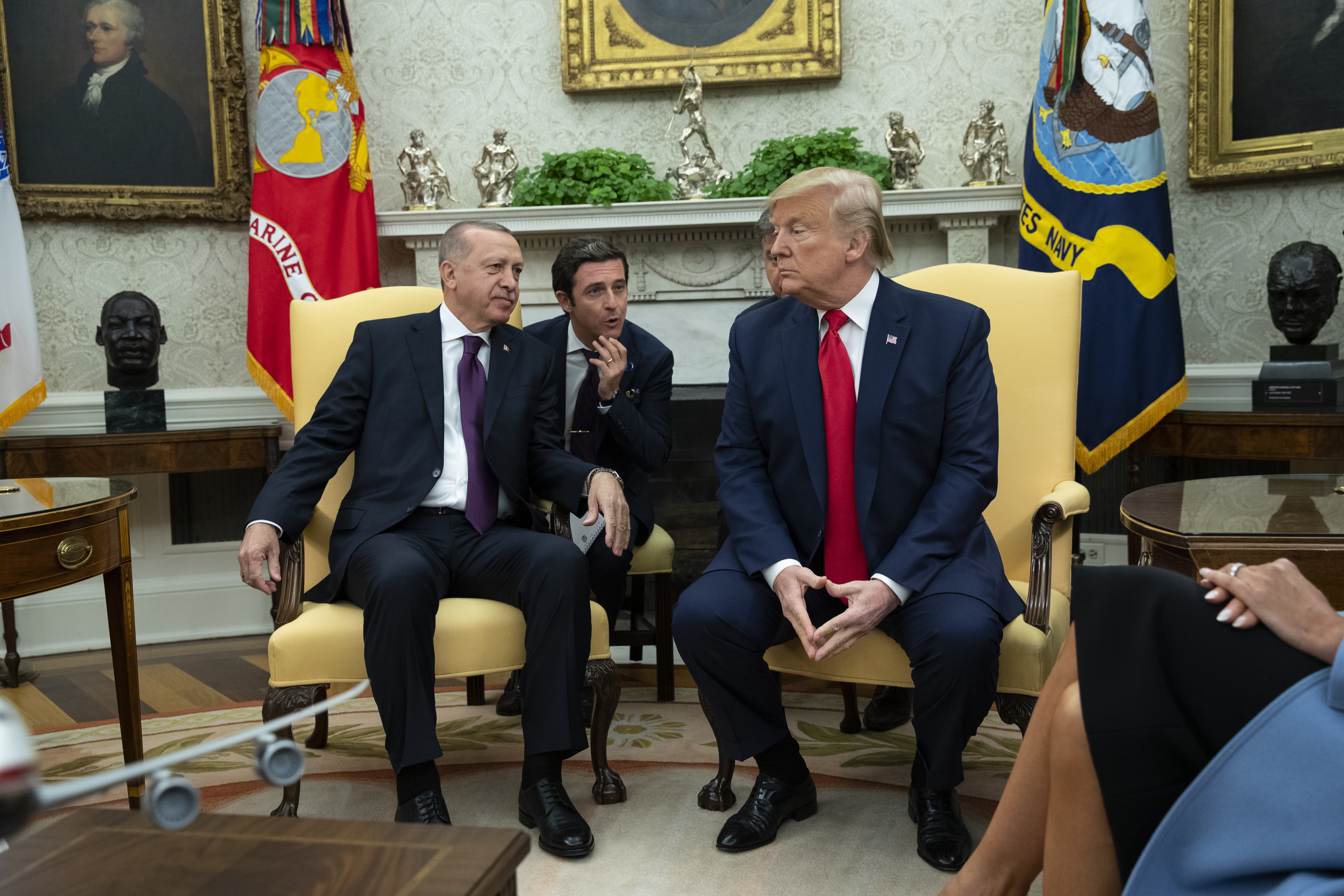 That was a reference to Rep. Adam Schiff, the House Intelligence Committee chairman overseeing the impeachment hearings on Capitol Hill.

The public impeachment hearings began Wednesday with two career public servants raising their hands and swearing an oath to the truth, not the presidency, representing an integral part of the system of checks and balances envisioned by the Founding Fathers. Trump has pushed back vigorously on impeachment inquiry, insisting he did nothing wrong in his dealings with Ukraine.

“New hoax. Same swamp,” read one tweet from the White House that Trump retweeted as the proceedings began. He quoted his defenders and lashed out at the first witnesses to testify publicly, declaring William Taylor, the charge d’affaires in Ukraine, and George Kent, a career diplomat, as “NEVER TRUMPERS!”

Taylor and Kent worked for Republican and Democratic administrations. There is no evidence that either engaged in partisan activity opposing Trump.

Overall, the president tweeted or retweeted more than 24 times before sitting down with Turkey’s Recep Tayyip Erdogan, circulating a video in which Trump deemed the impeachment proceedings “the single greatest scam in the history of American politics.”

“Our country is at stake like never before,” Trump said in the video. “They’re trying to stop me, because I’m fighting for you. And I’ll never let that happen.”

"They're trying to stop me, because I'm fighting for you. And I'll never let that happen." — President @realDonaldTrump pic.twitter.com/ch0N1SWShe

Trump and Erdogan were to a joint news conference later in the day, just weeks after Trump’s decision to pull most U.S. forces out of Syria led to a violent Turkish invasion.

The Democrats have been trying to make the case that the president tried to extort a foreign nation, Ukraine, to investigate a political rival, former Vice President Joe Biden. But even if the House ultimately votes to make Trump only the third American president to be impeached, few expect the Republican-controlled Senate to eventually remove Trump from office.

Although a number of the president’s advisers believe that impeachment could be a political winner for Trump on the campaign trail next year, the president has reacted angrily to the probe. He defends his summer phone call with Ukraine’s leader, which is at the heart of the inquiry, as “perfect” while deriding the impeachment effort as a conspiracy among Democrats and the “deep state.”

Trump has long been frustrated by the inability of his own White House staff and his Republican cohorts on Capitol Hill to change the narrative of the impeachment inquiry and has urged them to mount a more robust defense.

Trump allies seemed to settle on two talking points: that the hearings were “boring” and that the Ukraine matter was not an impeachable offense but a foreign policy disagreement. White House press secretary Stephanie Grisham hit on both, tweeting “This sham hearing is not only boring, it is a colossal waste of taxpayer time & money. Congress should be working on passing USMCA, funding our govt & military, working on reduced drug pricing & so much more.”

She went on to write: “Dems star witnesses can’t provide any first hand knowledge of any wrongdoing by @POTUS. Their own testimony contradicts the Dems false quid pro quo narrative. These are essentially two bureaucrats with a foreign policy gripe.”

The Trump campaign began blasting out rapid response rebuttals, one claiming that “the Democrats lie and slander President Trump” and made a fundraising appeal.

Although Trump has teased that he will soon release the transcript of his April phone call with Ukrainian President Volodymyr Zelenskiy, White House officials are not confirming that any such release is forthcoming. That first call to Zelenskiy is widely known to have been largely a congratulatory conversation after Zelenskiy’s election. It was the rough transcript of Trump’s second call with Zelenskiy, in July, that prompted a whistleblower’s complaint.

Releasing a transcript of the first call could be an attempt by the White House to distract from the congressional hearings, though the impeachment inquiry has moved well beyond the phone calls into broader attempts by the president and his allies to prod Ukraine to investigate Democrats by using U.S. military aid as leverage.