WASHINGTON (AP) — Donald Trump Jr., the president’s eldest son, said he is “glad this is finally over” after speaking to the Senate Intelligence Committee for around three hours on Wednesday.

Trump Jr. said he was happy to clarify answers from an interview with the panel’s staff in 2017, but told reporters, “I don’t think I changed any of what I said because there was nothing to change.”

Senators wanted to discuss the answers Trump Jr. gave in that 2017 interview, as well as the answers he gave to the Senate Judiciary Committee in a separate interview behind closed doors that year. He appeared in response to a subpoena from the panel’s Republican chairman, North Carolina Sen. Richard Burr, as part of the committee’s investigation into Russian interference.

The president’s former lawyer Michael Cohen told a House committee in February that before the presidential election he had briefed Trump Jr. approximately 10 times about a plan to build a Trump Tower in Moscow. But Trump Jr. told the Judiciary panel he was only “peripherally aware” of the real estate proposal.

The panel was also interested in talking to him about other topics as well, including a 2016 campaign meeting in Trump Tower in New York with a Russian lawyer that captured the interest of special counsel Robert Mueller. Emails leading up to the meeting promised dirt on Democrat Hillary Clinton, Trump’s opponent. Mueller’s report, released in April, examined the meeting but found insufficient evidence to charge anyone with a crime. 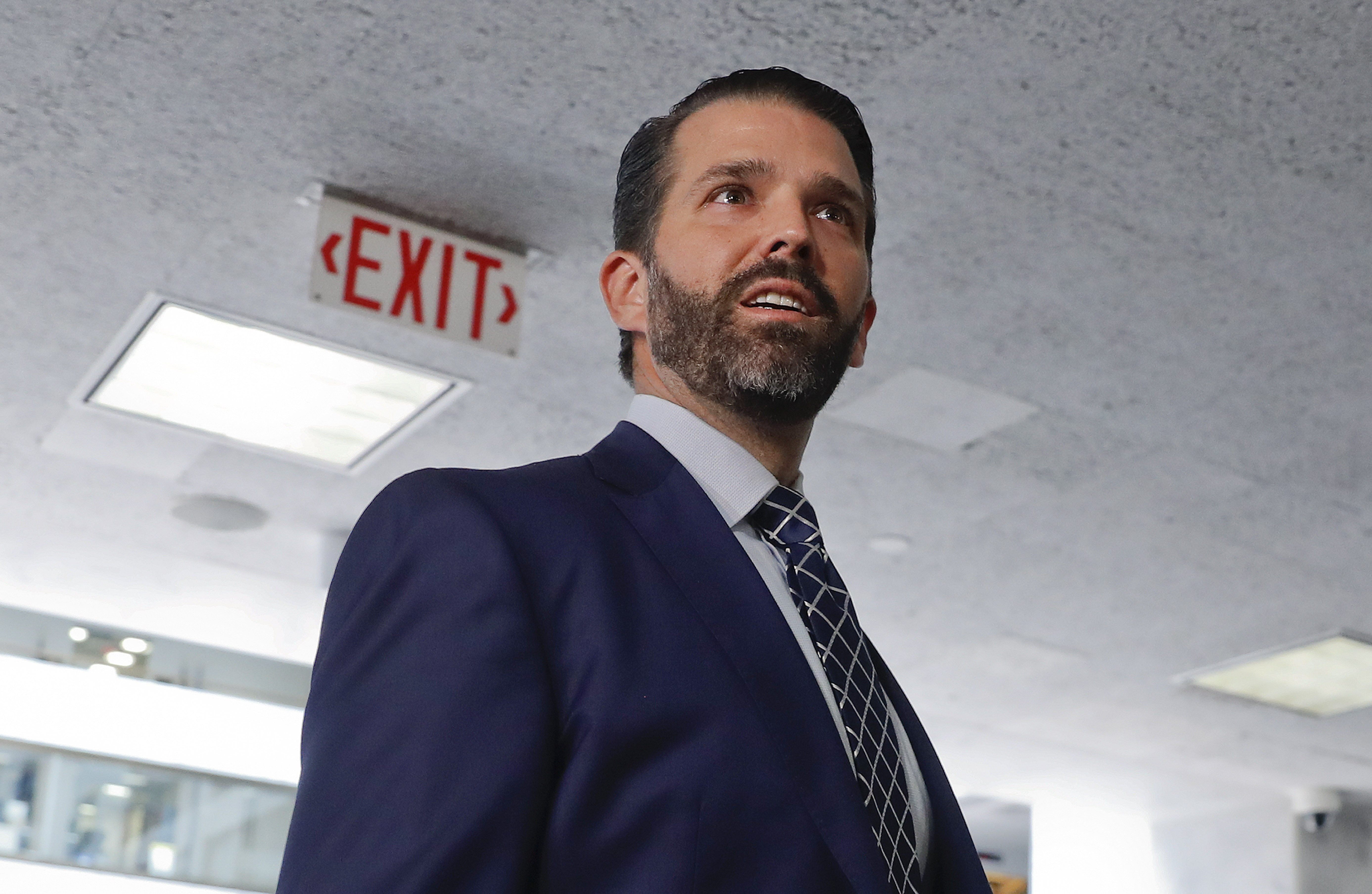 Trump Jr. would not discuss the details of the Senate interview, but said he was happy to comply if clarification was needed.

“I am glad this is finally over, we’re able to put some final clarity on that, and I think the committee understands that,” he said. Asked as he walked away if he is worried about perjury, Trump Jr. said “not at all.”

He also noted that Cohen is “serving time right now for lying to these very investigative bodies.”

Cohen pleaded guilty last year to campaign finance violations, lying to Congress and other crimes. He is currently serving a three-year prison sentence.

Trump Jr. said “I am glad this is finally over, we’re able to put some final clarity on that, and I think the committee understands that.” Asked as he walked away if he is worried about perjury, Trump Jr. said “not at all.”

Trump Jr.’s testimony comes as the Intelligence Committee continues its two-year investigation of Russian interference in the 2016 election. Some Republicans are becoming restless with the topic, and Burr received considerable blowback from colleagues over the subpoena. But he told fellow senators that Trump Jr. had backed out of an interview twice, forcing the committee to act.

Neither Burr nor the top Democrat on the panel, Virginia Sen. Mark Warner, would comment on the interview as they left.

The president said in May he believed his son was being treated poorly.

“It’s really a tough situation because my son spent, I guess, over 20 hours testifying about something that Mueller said was 100 percent OK and now they want him to testify again,” Trump told reporters at the White House. “I don’t know why. I have no idea why. But it seems very unfair to me.”

It was the first known subpoena of a member of the president’s immediate family, and some Republicans went so far last month as to suggest Trump Jr. shouldn’t comply.

Senate Majority Leader Mitch McConnell has defended Burr, saying “none of us tell Chairman Burr how to run his committee.”

Still, McConnell made it clear that he is eager to be finished with the probe, which began in early 2017.

It’s uncertain when the intelligence panel will issue a final report. Burr told The Associated Press last month that he hopes to be finished with the investigation by the end of the year.

The Latest: European Union leaders concerned about US racism

The Latest: Switzerland to lift travel limits on EU, UK