WASHINGTON (AP) — President Donald Trump on Tuesday pardoned Edward DeBartolo Jr., the former San Francisco 49ers owner convicted in a gambling fraud scandal who built one of the most successful NFL teams in the game’s history.

DeBartolo, who owned the San Francisco 49ers during their 1980s-1990s dynasty, was involved in one of the biggest owners’ scandals in the sport’s history. In 1998, he pleaded guilty to failing to report a felony when he paid $400,000 to former Louisiana Gov. Edwin Edwards in exchange for a riverboat gambling license.

Jerry Rice, Jim Brown, Charles Haley, and Derrick Brooks all thanked President Trump and spoke about the pardon outside of the White House.

“You know what, we all make mistakes and today the president cleared that mistake from him,” said Haley, an NFL Hall of Fame defensive end who played on two of DeBartolo’s Super Bowl winning teams.

DeBartolo, whose San Francisco 49ers won five Super Bowls under his leadership, stepped down as owner in 1997 after two Louisiana newspapers reported he would be indicted for gambling fraud.

The move by Trump comes as he’s stepped up efforts to use sports as a vehicle to reach out to American voters ahead of the November elections. The president and his campaign advisers have high hopes of expanding his base by pulling new voters to the polls who typically avoid politics.

On Sunday, Trump headed to the Daytona 500, becoming just the second sitting president to attend the NASCAR event. In recent months, the president has also made high-profile visits to the World Series and the college football championship game. Trump was greeted with cheers by football and NASCAR fans, and a chorus of boos at Game 5 of the World Series hosted by the Washington Nationals.

Ohio Pastor Darrell Scott, an early supporter and longtime ally of the president, said that he submitted the package advocating DeBartolo’s case more than a year ago, and said a long list of “NFL greats” had submitted character references on his behalf. Scott had also encouraged Trump to intervene on behalf of the New York rapper A$AP Rocky after he was detained in Stockholm in last summer after getting involved in a street fight in the Swedish capital.

“It’s something DeBartolo… he’s been wanting that stain removed from his legacy for a long time,” said Scott, who attend Tuesday’s announcement.

Scott said that he submitted the package advocating DeBartolo’s case more than a year ago, and said a long list of “NFL greats” had submitted character references on his behalf.

“He thought about it, he considered it,” Scott said of Trump. “I think it’s long overdue.” 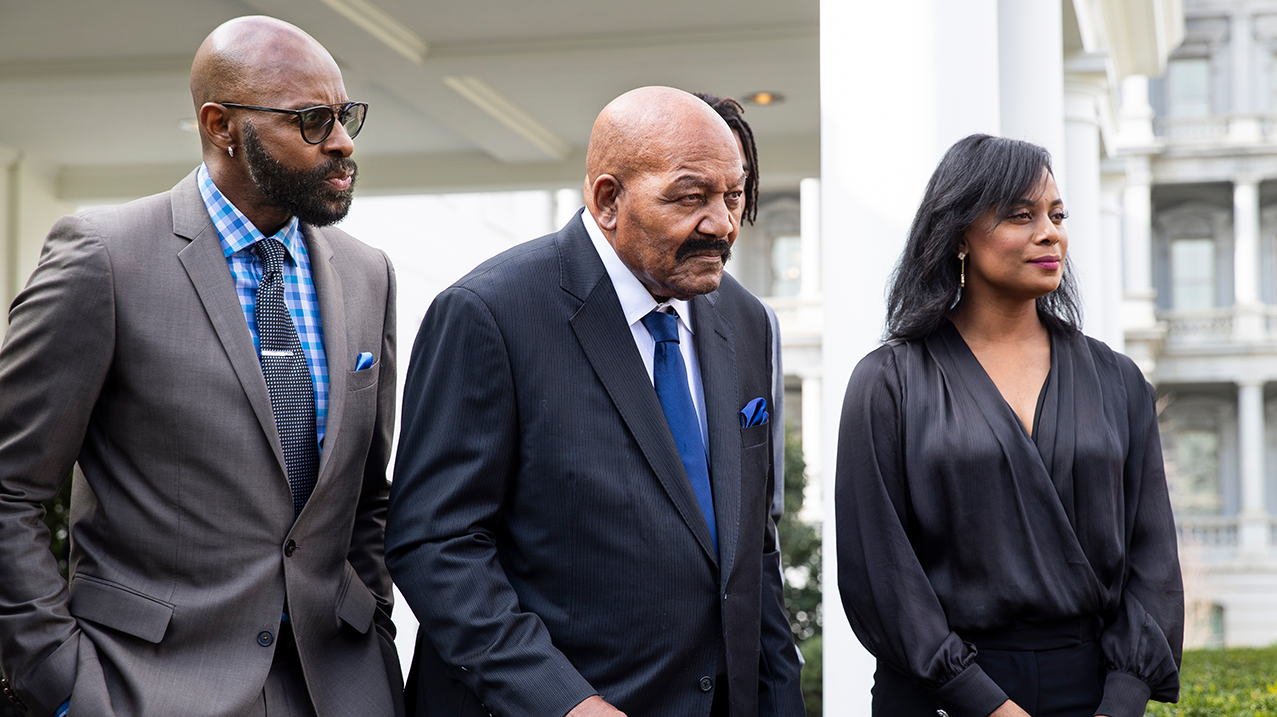 Trump has used the power of pardon several times throughout his presidency to clear high-profile Americans convicted of crimes.

Others pardoned by Trump include former Arizona sheriff Joe Arpaio,, who faced jail time after a conviction stemming from his use of immigration patrols that focused on Latinos; conservative commentator Dinesh D’Souza, who received five years of probation after pleading guilty to campaign finance fraud; and I. Lewis “Scooter” Libby, a former top aide to Vice President Dick Cheney who was convicted of lying to investigators and obstruction of justice following the 2003 leak of the covert identity of CIA officer Valerie Plame.

DeBartolo avoided prison, was fined $1 million and was suspended for a year by the NFL. But the episode effectively ended his NFL career.

DeBartolo withdrew from the project after the state gambling board demanded he hand over all documents he gave to the grand jury. The documents included an “unexecuted agreement” between DeBartolo and the former governor’s son, Stephen Edwards.

Rice, an NFL Hall of Famer who played on three of DeBartolo’s Super Bowl-winning teams, said DeBartolo “was like that 12th man” of the great 49ers teams.

“He’s the main reason why we won so many Super Bowls,” Rice said. “So today is a great day for him. I’m glad to be here and be a part of that. It’s just something I will never forget. This man, he has done so much in the community, has done so much in NFL football.”

DeBartolo withdrew from the riverboat gambling project after the state gambling board demanded he hand over all documents he gave to the grand jury. The documents included an “unexecuted agreement” between DeBartolo and Stephen Edwards.

The state gambling board canceled the project after DeBartolo withdrew.

The DeBartolo family built their fortune through commercial real estate – mostly owning shopping malls. The family business was started by DeBartolo’s father, who died in 1994. In addition to the 49ers, the family also owned the Pittsburgh Penguins of the National Hockey League before selling the team in 1991.

DeBartolo Jr. ran the San Francisco 49ers starting 1977, and his hiring of coach Bill Walsh in 1979 led to the franchise’s most successful era. From 1982 to 1995, the team won five Super Bowlsand made 18 playoff appearances.

After the suspension, DeBartolo gave control of the team to his sister, Denise DeBartolo York.

He never returned to the NFL after his suspension. The team is now run by his nephew, Jed York.

DeBartolo was elected to the Pro Football Hall of Fame in 2016.

“I’m going to make it real simple: Eddie DeBartolo is a great man,” said the former Cleveland Brown fullback. “I’m here to support him … But I’m 100 behind his humanity and he’s been a great, great friend of mine and for the league after all these years. So thank you.”