WASHINGTON D.C. (KUSI) – President Donald Trump says he thinks the new administration will have “great success” and claims to have laid the foundation for it. 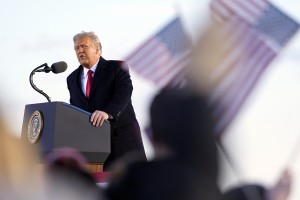 Trump says the new administration has the “foundation to do something really spectacular.” He made brief farewell remarks at Maryland’s Joint Base Andrews before he boarded Air Force One for a flight to his Florida home.

Trump did not mention President-elect Joe Biden by name during his Wednesday remarks.

Trump told cheering, chanting supporters he’ll be watching and listening from a distance. He promised he will be back “in some form” and wished the crowd a “good life” before he and his wife boarded the plane.

Trump wanted to be in Florida before Biden becomes president at noon.

The Latest: Kentucky urges Black citizens to get vaccinated