Trump signs $8.3B bill to combat coronavirus outbreak in US

WASHINGTON (AP) — President Donald Trump on Friday signed an $8.3 billion measure to help tackle the coronavirus outbreak that has killed more than a dozen people in the U.S. and infected more than 200.

The legislation provides federal public health agencies with money for vaccines, tests and potential treatments and helps state and local governments prepare and respond to the threat. The rapid spread of the virus has rocked financial markets, interrupted travel and threatens to affect everyday life in the United States.

Trump had planned to sign the bill during a visit to the Centers for Disease Control and Prevention in Atlanta. But he told reporters Friday that concerns were raised about “one person who was potentially infected” who worked at the CDC. Trump said the person has since tested negative for the new virus, and the CDC was added to his schedule on Friday.

The Senate passed the $8.3 billion measure Thursday to help tackle the outbreak in hopes of reassuring a fearful public and accelerating the government’s response to the virus. Its rapid spread is threatening to upend everyday life in the U.S. and across the globe.

The money would pay for a multifaceted attack on a virus that is spreading more widely every day, sending financial markets spiraling again Thursday, disrupting travel and potentially threatening the U.S. economy’s decade-long expansion.

Thursday’s sweeping 96-1 vote sends the bill to the White House for President Donald Trump’s signature. Sen. Rand Paul, R-Ky., cast the sole “no” vote. The House passed the bill Wednesday by a 415-2 vote. 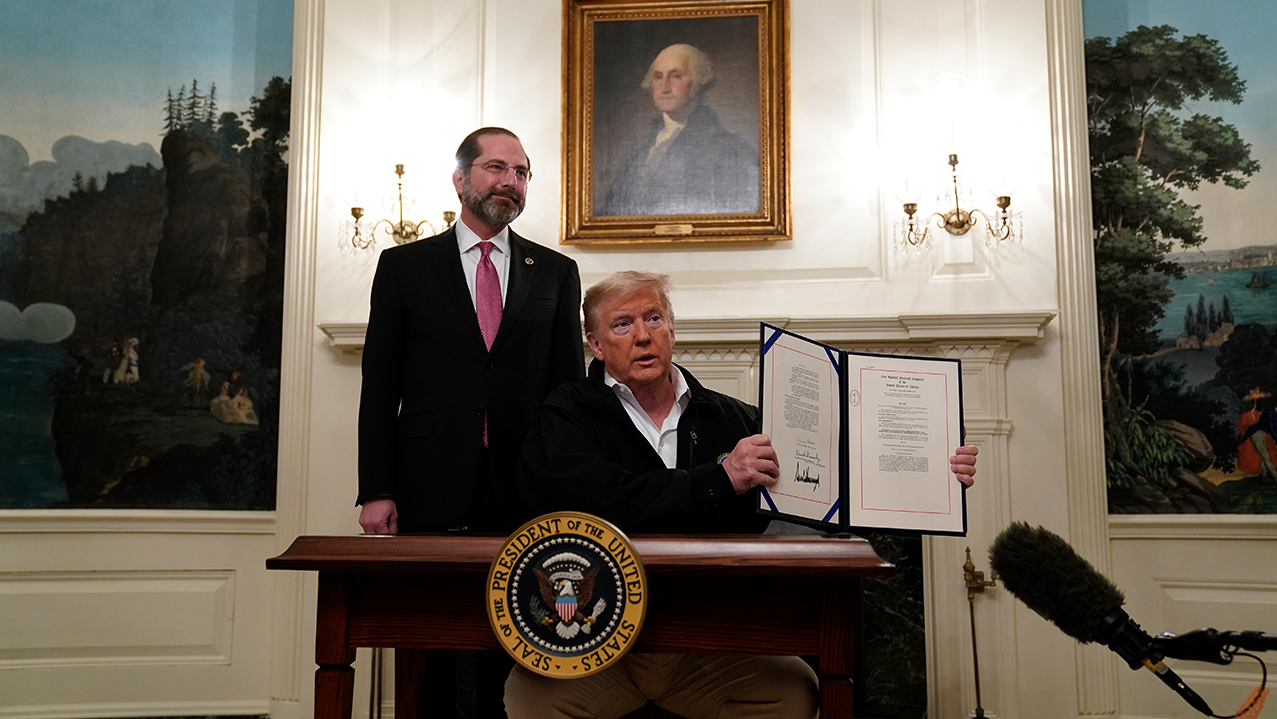 President Donald Trump hold up an $8.3 billion bill to fight the coronavirus outbreak in the U.S., Friday, March 6, 2020 at the White House in Washington after signing it, as Department of Health and Human Services Secretary Alex Azar, looks on. The legislation provides federal public health agencies with money for vaccines, tests and potential treatments and helps state and local governments prepare and respond to the threat. The rapid spread of the virus has rocked financial markets, interrupted travel and threatens to affect everyday life in the United States. (AP Photo/Evan Vucci)

The plan would more than triple the $2.5 billion amount outlined by the White House 10 days ago. The Trump proposal was immediately discarded by members of Congress from both parties. Instead, the bipartisan leadership of the House and Senate Appropriations committees negotiated the increased figure and other provisions of the legislation in a burst of bipartisan cooperation that’s common on the panel but increasingly rare elsewhere in Washington.

“In situations like this, I believe no expense should be spared to protect the American people, and in crafting this package none was,” said Appropriations Committee Chairman Richard Shelby, R-Ala. “It’s an aggressive plan, a vigorous plan that has received an overwhelming positive reaction.”

Trump was sure to sign the measure, which has almost universal support. It is intended to project confidence and calm as anxiety builds over the impact of the virus, which has claimed more than a dozen lives in the U.S.

“The American people are looking for leadership and want assurance that their government is up to the task of protecting their health and safety,” said Sen. Patrick Leahy, D-Vt.

The impact of the outbreak continues to mount. The British government is considering suspending Parliament for five months in hope of limiting the spread of the virus in the United Kingdom.

The legislation would provide federal public health agencies money for vaccines, tests and potential treatments, including $300 million to deliver such drugs to those who need it. More than $2 billion would go to help federal, state and local governments prepare for and respond to the coronavirus threat. An additional $1.3 billion would be used to help fight the virus overseas. There’s also funding to subsidize $7 billion in small business loans.

Other dollars would be directed to help local officials prepare for the potential worsening of the outbreak and subsidize treatment by community health centers. Medicare rules would be loosened to enable remote “telehealth” consultations whereby sick people could to get treatment without visiting a doctor.

Sen. Maria Cantwell, D-Wash., whose state is at the center of the crisis, praised the bill because it “will increase access for public lab testing, help pay for isolation and quarantine, help pay for sanitizing in public areas, better track the virus and those who might come into contact with it, help labs who are trying to identify hot spots, and limit exposure.”

The legislation contains a hard-won compromise that aims to protect against potential price gouging by drug manufacturers for vaccines and other medicines developed with taxpayer funds. Health and Human Services Secretary Alex Azar would have the power to make sure commercial prices are reasonable. Azar is a former drug industry lobbyist.

Democrats said other steps may be needed if the outbreak continues to worsen.

“This may be a first step because we have issues that relate to unemployment insurance for people who are put out of work.” Pelosi said as she signed the bill to send it to Trump.

“We have only about 27% of people in this country who have paid sick days. So if they have to go home what is going to happen to them and their families?” said Rep. Rosa DeLauro, D-Conn.

DeLauro said Pence responded that he would raise the issue with the president.

The bill seeks to restore $136 million that the Department of Health and Human Services cut from other accounts such as heating subsidies for the poor to battle the virus.

The legislation comes as carping over the administration’s response to the outbreak is quieting down. Lawmakers in both parties had faulted a shortage of tests for the virus and contrasting messages from Trump and his subordinates. In an interview with Sean Hannity of Fox News on Wednesday, Trump downplayed the lethality of the virus, saying the World Health Organization’s updated estimate of a 3.4% death rate in coronavirus cases is “a false number.”

“Now you’re starting to see rapid deployment of tests, which makes me feel better, quite honestly,” said Rep. Raul Ruiz, D-Calif., a doctor. “I think their communications are a little better. As long as the president doesn’t contradict the experts and the scientists who know what they’re doing, things will get better.”