Trump to say Venezuela’s move to democracy is ‘irreversible’

President Trump is expected to deliver remarks to the Venezuelan-American community in Florida.Details – http://bit.ly/2NcQ9oS 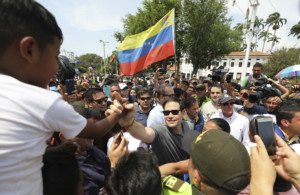 U.S. Senator Marco Rubio, R-Fla., greets Venezuelan migrants near the Simon Bolivar International Bridge, which connects Colombia with Venezuela, where one holds up Venezuelan flag in La Parada, near Cucuta, Colombia, Sunday, Feb. 17, 2019. As part of U.S. humanitarian aid to Venezuela, Rubio is visiting the area where the medical supplies, medicine and food aid is stored before it it expected to be taken across the border on Feb. 23. (AP Photo/Fernando Vergara)

White House press secretary Sarah Sanders said that Trump will express “strong support” for Guaido, whom the U.S. recognizes as the country’s rightful president, and condemn President Nicolas Maduro’s government and its socialist policies. As the monthslong political crisis continues, Trump is to make a public case to Venezuela’s military, which could play a decisive role in the stalemate, to support Guaido’s government. The Venezuelan military has largely remained loyal to Maduro.

Sanders said Trump would warn the Venezuelan military that they “have a clear choice — work toward democracy for their future and the future of their families, or they will lose everything they have.” She adds Trump will state that the U.S. “knows where military officials and their families have money hidden throughout the world.”

The military has blocked the U.S. from moving tons of humanitarian aid airlifted in recent days to the Colombian border with Venezuela. The aid shipments have been meant in part to dramatize the hyperinflation and shortages of food and medicine that are gripping Venezuela.

Trump is set to deliver remarks at Florida International University in Miami. South Florida is home to more than 100,000 Venezuelans and Venezuelan-Americans, the largest concentration in the country. Earlier the White House said Trump would use the speech to warn of “the dangers of socialism.”

Trump is to be joined by local officials and Secretary of State Mike Pompeo.

Trump is also looking to draw a contrast with the policies of progressive Democrats, which he brands as “socialist,” as he gears up for re-election.

Trump has been spending the holiday weekend at his private club in West Palm Beach, Florida.