WASHINGTON (AP) — President Donald Trump said Friday he is “very seriously” considering an executive order to try to force the inclusion of a citizenship question as part of the 2020 Census.

Speaking to reporters as he departed the White House for a weekend in New Jersey, Trump said the idea is among four or five options he’s considering as he pushes the issue.

“It’s one of the ways that we’re thinking about doing it, very seriously,” he said, despite the fact that the government has already begun the process of printing the census questionnaire without that question.

Trump’s administration has faced numerous roadblocks to adding the question, including last week’s Supreme Court ruling that blocked its inclusion, at least temporarily. Both the Justice and Commerce departments indicated on Tuesday that they were moving forward with the census, minus the citizenship question.

But Trump has insisted otherwise, pushing his administration to come up with a way to include the controversial query. He suggested Friday officials might be able to add an addendum to the questionnaire with the question after it’s already printed. 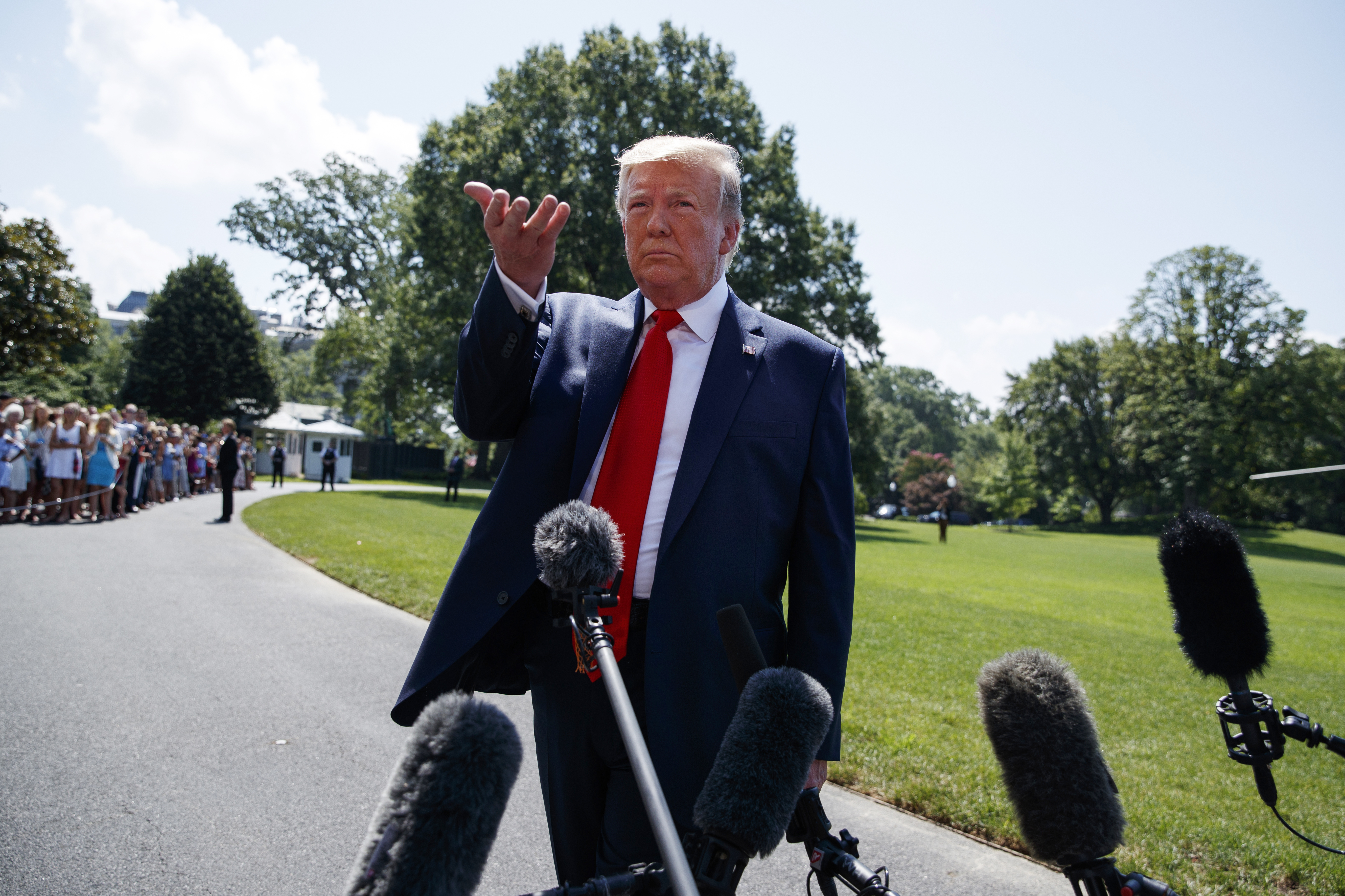 President Donald Trump talks to reporters on the South Lawn of the White House before departing for his Bedminster, N.J. golf club, Friday, July 5, 2019, in Washington. (AP Photo/Evan Vucci)

The census has not broadly asked about citizenship since 1950 , and the Census Bureau’s own experts have said that adding it next year would discourage immigrants from participating and result in a less accurate population count.

An executive order would not, by itself, override court rulings blocking the inclusion of the citizenship question. But such an action from Trump would perhaps give administration lawyers a new basis to try to persuade federal courts that the question could be included.

“Executive orders do not override decisions of the Supreme Court,” Thomas Saenz, president and general counsel of the Mexican American Legal Defense and Educational Fund, said in a statement Friday. MALDEF is representing plaintiffs in the census lawsuit in Maryland.

Opponents of the citizenship question say it would discourage immigrant participation , resulting in inaccurate figures for a count that determines the distribution of some $675 billion in federal spending, as well as how many congressional districts each state gets.

Hazel is one of three federal judges who blocked the Trump administration from adding a citizenship question to the 2020 census. The others are in New York and California.

In the Supreme Court’s decision last week, Chief Justice John Roberts joined the court’s four more liberal members in saying the administration’s current justification for the question “seems to have been contrived.”

The administration had pushed the Supreme Court to decide the case quickly, citing a July 1 deadline to begin printing the forms. The court took the rare step of taking up the case directly from a trial court in New York before an appeals court had weighed in. As recently as June 20, Solicitor General Noel Francisco reminded the justices of the need for a quick decision, writing that “for all practical purposes, the Census Bureau needs to finalize the 2020 questionnaire by June of this year.”

The Trump administration had said the question was being added to aid in enforcement of the Voting Rights Act, which protects minority voters’ access to the ballot box.

But the question’s opponents say recently discovered evidence from the computer files of a Republican redistricting consultant who died last year shows that, far from helping minority voters, discrimination against Hispanics was behind the push for the citizenship question.

Hazel is considering reopening the Maryland case to take account of the new evidence, which could provide a separate basis for blocking the citizenship question.