SAN DIEGO (KUSI) – President Trump is encouraging his supporters to purchase a new memoir, written by one of his former assistant’s, Madeline Westerhout.

Westerhout abruptly resigned from the White House in August 2019 after coming under scrutiny for sharing intimate details about the president and his family with the press at an off-the-record dinner.

Days after the firing, President Trump tweeted that he “forgave” Westerhout and called her a “very good person.”

….went on at the White House during some extremely interesting and important times. So many good stories by someone who, unlike most other so called writers, was actually there, and a part of the action – of which there was plenty. Go buy this book, a job well done!

Westerhout has now published a new book titled, “Off The Record: My Dream Job At The White House, How I Lost It, and What I Learned” detailing her experience. 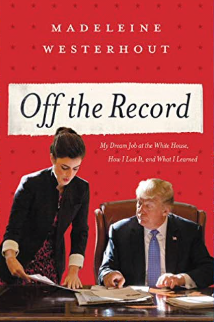 Westerhout said the book reads like her personal diary, and everything in it is completely honest. She says she wanted to reveal a side of the president that hardly any people ever get to see, as well as share some surprising personal details.

Westerhout told KUSI’s Lauren Phinney that the press is so unfair to President Trump, and this book was her chance to set the record straight on how personable President Trump is.

She explained, “the man that I got to know is a kind and generous person, he is a great father, he is a good husband, he’s a really encouraging boss, and he’s a great leader for this country.”

Westerhout shared some photos of her working with President Trump that we shared on Good Morning San Diego and can be seen below.