CALABASAS (KUSI) – Basketball fans across the country were remembering Tuesday’s first anniversary of the helicopter crash in Calabasas that killed Lakers legend Kobe Bryant, his 13-year-old daughter Gianna and seven others, as a final determination on the probable cause of the crash approaches.

Bryant’s widow Vanessa took to Instagram on Tuesday to post a letter she received from one of Gianna’s best friends, which read in part, “My mind constantly thinks of your beautiful daughter. Her smile and attitude push me to be better. You have probably heard this, but if I ever become a mom, I hope my daughter turns out exactly as yours did.” 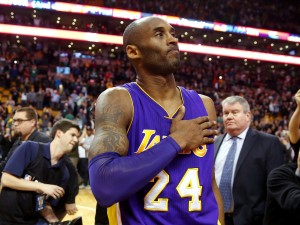 FILE – In this Dec. 30, 2015, file photo, Los Angeles Lakers’ Kobe Bryant touches his chest as he walks off the court in Boston after the Lakers’ 112-104 win over the Boston Celtics in an NBA basketball game. Kobe Bryant’s legacy may be stronger than ever. Tuesday, Jan. 26, 2021, marks the anniversary of the crash that took the lives of Bryant, his daughter Gianna and seven other people. (AP Photo/Winslow Townson, File)

Vanessa Bryant wrote: “Today I received this sweet letter from one of Gianna’s best friends, Aubrey. I love you Aubz (as my Gigi would call you) … My Gigi is INCREDIBLE and I truly appreciate your thoughtful letter. She loves you so much. I miss my baby girl and Kob-Kob so much, too. I will never understand why/how this tragedy could’ve happened to such beautiful, kind and amazing human beings. It still doesn’t seem real. Kob, we did it right. Gigi, you still make mommy proud. I love you!”

Bryant’s former Lakers teammate Paul Gasol tweeted his remembrances, writing, “I miss you, hermano… not a day goes by that you are not present in what I do. You spirit, your drive, your ambition, your love… continues to shine in my life and in many others. … I hope you and Gigi are smiling down seeing how strong, sweet and amazing your girls are.”

The sports world was stunned the morning of Jan. 26, 2020, when the helicopter carrying the 41-year-old Bryant and his daughter, along with two of her teenage basketball teammates and four additional adults, slammed into a hillside that fateful Sunday as they were en route to the retired NBA star’s Mamba Sports Academy. There were no survivors.

In addition to the Bryants, those who died in the crash were:

— John Altobelli, 56, a longtime coach of the Orange Coast College baseball team, along with his wife, Keri, 46, and their 13-year-old daughter Alyssa, who was a teammate of Gianna’s on Bryant’s Mamba Sports Academy youth basketball team;

— Sarah Chester, 45, and her 13-year-old daughter Payton, who also played with Gianna and Alyssa;

— Christina Mauser, 38, one of Bryant’s assistant coaches on the Mamba Academy team; and

Since then, people have tried to make sense of what happened, and the National Transportation Safety Board has scheduled a Feb. 9 meeting to announce the results of its investigation into the cause of the crash.

Documents made public last year by the NTSB lent credence to the growing theory the pilot may have become disoriented while navigating through the fog while ferrying the passengers from Orange County to Camarillo. They were going to the former Laker’s Mamba Sports Academy in Thousand Oaks for a youth basketball game, with Bryant scheduled to coach his daughter’s team.

According to documents made public last summer, Zobayan’s last communication with air-traffic controllers before the crash indicated that he was climbing to 4,000 feet to get above the cloud cover. However, flight data from the NTSB indicated the Sikorsky S-76B helicopter was actually descending at the time while banking to the left, ultimately slamming into the ground a rate of about 4,000 feet per minute.

According to one of the documents, just before the crash, flight data showed the helicopter had “reached its maximum altitude and began descending. During the final descent the pilot, responding to ATC (air traffic control), stated that they were “climbing to 4,000.”

That was Zobayan’s final transmission.

Documents released thus far have not reached any conclusions as to the actual cause of the crash, which has sparked an array of lawsuits filed by relatives of the crash victims, including Bryant’s widow.

Vanessa Bryant has also sued the Los Angeles County Sheriff’s Department over cell phone pictures taken at the crash scene by responding deputies, and recently posted a plea on Instagram for the media to take care in reporting on the anniversary.

“We ask that you do not air photos of the wreckage, helicopter in the air or accident scene. We do NOT want to see it. Our year has been traumatic enough… We hope videos of remembrance are done in a classy and tasteful manner that is respectful of all our losses.”

Mourners this past year have paid tribute to the sports legend in many ways. Murals of Bryant color the Southland and the world, with the website KobeMural.com mapping hundreds of sites for people to pay their respects.

Just before leaving office, former President Donald Trump signed an executive order to put together a National Garden of American Heroes, or National Garden, with Bryant to be included on the list of heroes.

The team isn’t planning a formal tribute on the anniversary of his death, nor are players scheduled to wear their “Black Mamba” tribute uniforms for Wednesday’s game in Philadelphia. However, players have been paying subtle tribute by wearing his signature sneakers and breaking huddles by shouting “Mamba on three!”

Lakers leader LeBron James was asked about the impending anniversary after the Lakers’ game on Saturday night.

“Man, it’s a saying that says, `Time heals all,”‘ James told reporters. “And as devastating and as tragic as it was and still is to all of us involved with it, only time (will help). And it takes time. Everyone has their own grieving process. Everyone understands that everyone individually is different. Everyone is going to grieve differently. All you can do as a friend or a loved one or anyone in our brotherhood or our familyhood that we have here in the Lakers organization is to put an arm around someone when they need it.”