WASHINGTON (AP) — The CEOs of Twitter and Facebook on Tuesday defended their safeguards against disinformation in the presidential election, and promised Congress they would take vigorous action for two special elections in Georgia that could determine which party controls the U.S. Senate.

Twitter CEO Jack Dorsey and Facebook CEO Mark Zuckerberg told a hearing of the Senate Judiciary Committee they have strong programs in place to protect their platforms from being used to disseminate falsehoods or discourage people from voting in the Georgia elections.

“You have an immense civic and moral responsibility,” Sen. Richard Blumenthal, a Connecticut Democrat, told the executives. He said the actions the companies took to slow the spread of disinformation in the contest between President Donald Trump and Democrat Joe Biden were constructive. But Blumenthal said he was concerned they could let their guard down for the Georgia elections and fail to act against dangerous information.

“You’ve tried to slow its spread. That’s not censorship,” he said.

But Republican senators, including Committee Chairman Sen. Lindsey Graham, revived complaints of censorship and anti-conservative bias against the social media platforms and pushed for stripping away some of the protections that have shielded tech companies from legal responsibility for what people post.

“I think there’s Republican and Democratic concern about the power that’s being used by social media outlets to tell us what we can see and what we can’t, what’s true and what’s not,” Graham said at the start of the hearing.

Senator Ted Cruz grilled Twitter CEO Jack Dorsey over the censorship and labeling of tweets relating to alleged voter fraud in the 2020 election.

Democrats also support curbing the long-held legal shield for tech companies, though for different reasons. They have focused their concern on hate speech and incitement on social media platforms that can spawn violence. President-elect Biden has heartily endorsed restricting the legal immunity for social media platforms under Section 230 of a 1996 telecommunications law.

Graham and other prominent Republican senators have refused to knock down Trump’s unfounded claims of voting irregularities and fraud, even as misinformation disputing Biden’s victory has flourished online.

Twitter and Facebook have both slapped a misinformation label on some content from Trump, most notably his assertions linking voting by mail to fraud. On Monday, Twitter flagged Trump’s tweet proclaiming “I won the Election!” with this note: “Official sources called this election differently.”

Dorsey testified that Twitter flagged some 300,000 tweets between Oct. 27 and Nov. 11 for content that was disputed and potentially misleading, representing 0.2% of all U.S. election-related tweets sent during the period.

“We applied labels to add context and limit the risk of harmful election misinformation spreading without important context, because the public told us they wanted us to take these steps,” he said.

Of the labeled tweets, 456 also were covered by a warning message and were limited in how they could be shared. About 74% of the people who viewed those tweets saw them after a label or warning message was applied. 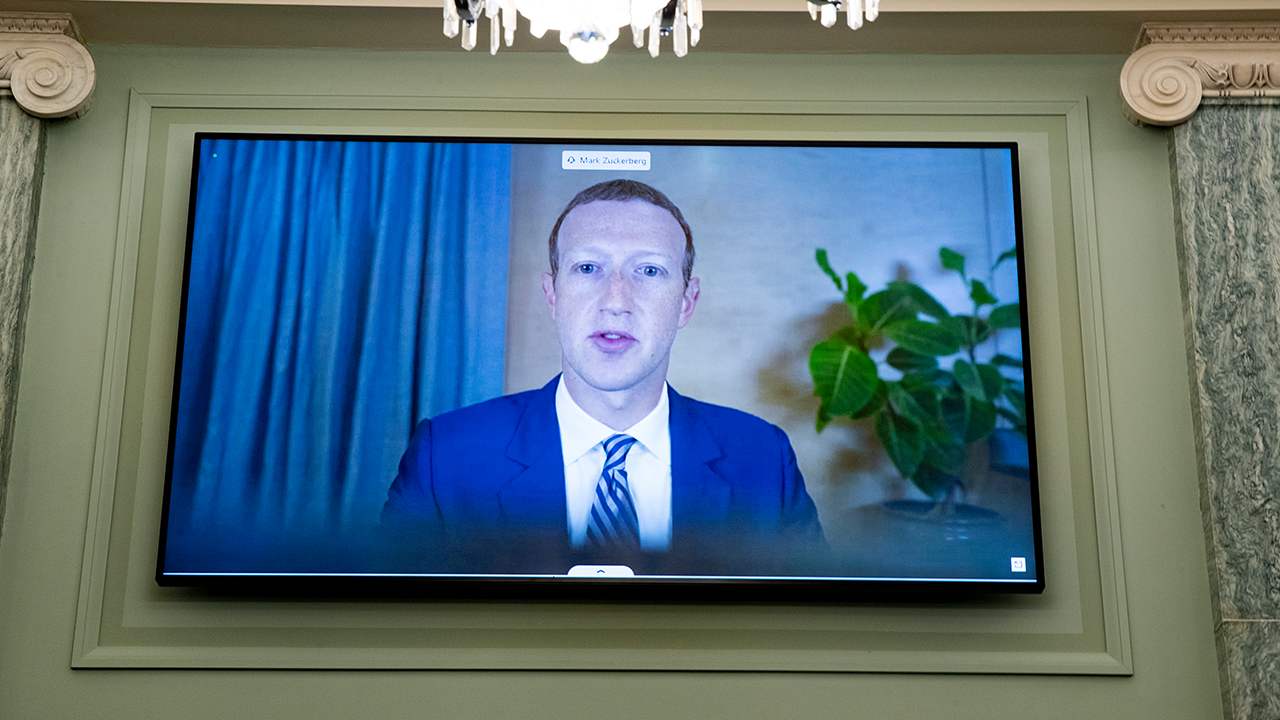 Facebook CEO Mark Zuckerberg appears on a screen as he speaks remotely during a hearing before the Senate Commerce Committee on Capitol Hill, Wednesday, Oct. 28, 2020, in Washington. The committee summoned the CEOs of Twitter, Facebook and Google to testify. (Michael Reynolds/Pool via AP)

Zuckerberg said Facebook joined with election officials to remove false claims about polling conditions and displayed warnings on more than 150 million pieces of content after review by independent fact-checkers. Facebook also prohibited misrepresentations about how or when to vote as well as attempts to use threats on the coronavirus to scare people into not voting, he said.

Zuckerberg and Dorsey promised lawmakers last month that they would aggressively guard their platforms from being manipulated by foreign governments or used to incite violence around the election results — and they followed through with high-profile steps that angered Trump and his supporters.

Facebook moved two days after the election to ban a large group called “Stop the Steal” that Trump supporters were using to organize protests against the vote count. The 350,000-member group echoed Trump’s baseless allegations of a rigged election rendering the results invalid.

For days after the election as the vote counting went on, copycat “Stop the Steal” groups were easily found on Facebook. As of Monday, Facebook appeared to have made them harder to find, though it was still possible to locate them, including some groups with thousands of members.

The GOP majority on the Judiciary panel threatened Zuckerberg and Dorsey with subpoenas last month if they didn’t voluntarily agree to testify for Tuesday’s hearing. Republicans on the Senate Commerce Committee lambasted the two CEOs and Sundar Pichai, Google’s chief executive, at a hearing last month for what they said was a pattern of silencing conservative viewpoints while giving free rein to political actors from countries like China and Iran.