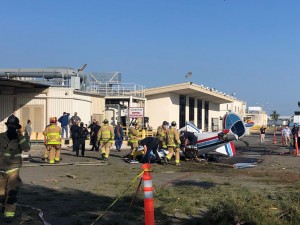 The aircraft went down for unknown reasons shortly before 4:30 p.m. in an industrial area in the 8600 block of Balboa Avenue in Kearny Mesa, according to the San Diego Fire-Rescue Department.

According to SDFD Battalion Chief Dan Eddy, the plane took off from Montgomery Field and immediately encountered an issue and tried to circle back to the airport, instead crashing nearby in the parking of KYOCERA International, Inc.

Paramedics took the two people who had been aboard the plane to nearby Sharp Memorial Hospital, SDFD spokeswoman Monica Munoz said.

Their names and details on their injuries were not immediately available.