SAN DIEGO (KUSI) — A groundbreaking ceremony was held Wednesday for a new UC San Diego facility in Downtown. However, the construction project includes much more then just space for university programs.

It’s being described as a dynamic development in downtown San Diego. The new facility on Park and Market will connect UC San Diego to the downtown innovation community and to diverse neighborhoods throughout San Diego’s urban core.

"We want to be the best possible server of the under-served communities in this great city." said Pradeep K. Khosla, Chancellor, UC San Diego.

The developer, Holland Partner Group, will also build a 34-foot story residential tower that will have 426 units, 85 of which will be rent-restricted affordable apartments for very low income residents.

"It was 6 years ago when we discovered this neighborhood.  It was evolving.  What attracted us was the combination of walk-ability, the scale, the proximity to jobs just the downtown environment." said Tom Warren, Executive Managing Director, Holland Partner Group.
Warren explained that the city had clear guidelines when it put out a "request for proposal" on the property three years ago that it wanted the residential complex to have a least %15 affordable housing units.

In addition to that, the developer will build ground-floor retail, an outdoor Amphitheater and public open space.

A two-story historic building that currently sits vacant on the lot will be moved off property until the development is complete.
Upon its return the developer says it will serve as a restaurant.

The UC San Diego urban facility is expected to open in 2021. 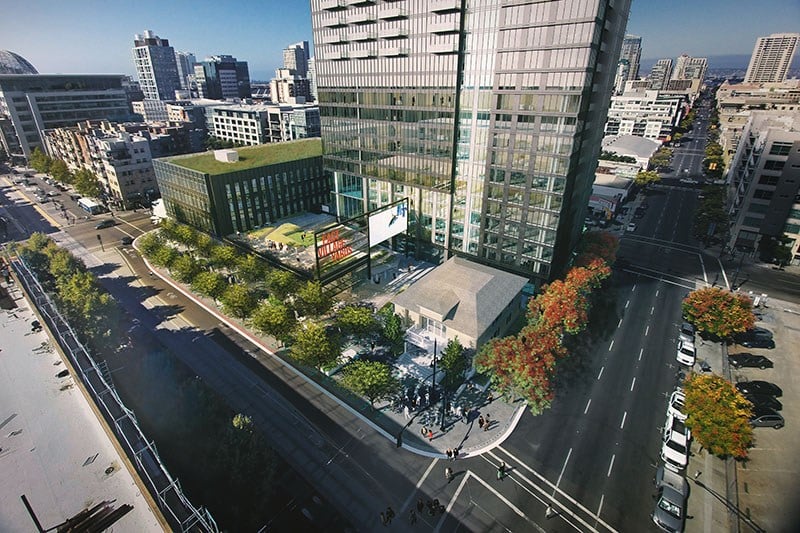