Ukraine president: ‘No blackmail’ in conversation with Trump

KYIV, Ukraine (AP) — Ukraine’s president insisted Thursday that he faced “no blackmail” from President Donald Trump in their phone call that led to an impeachment inquiry, distancing himself from the U.S. political drama and trying to claw back his own credibility.

Volodymyr Zelenskiy said for the first time that his country will “happily” investigate the conspiracy theory pushed by Trump that it was Ukrainians, not Russians, who interfered in the 2016 U.S. presidential election. And he encouraged U.S. and Ukrainian prosecutors to discuss investigating a gas company linked to the son of Trump’s Democratic rival Joe Biden, although no one has produced evidence of criminal wrongdoing by the former U.S. vice president or his son.

While responding to Trump’s requests, Zelenskiy insisted he was not his puppet, and he appeared to be trying to put an end to questions that have dogged the new Ukrainian president since details of his July 25 call with Trump emerged. 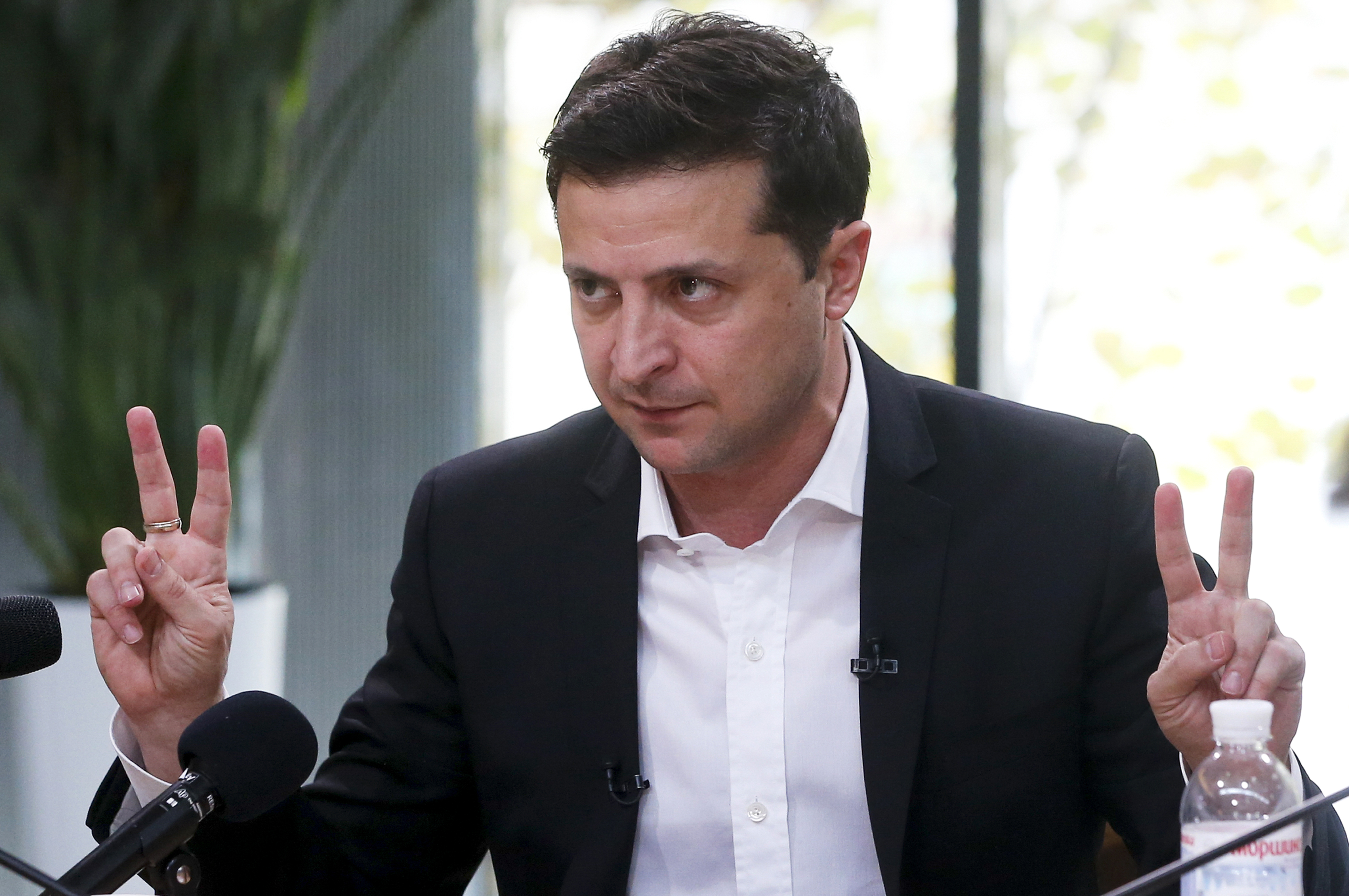 He said U.S. officials have presented zero evidence of Ukraine’s interference in 2016, but it’s in his country’s interests to find out once and for all what happened.

In an all-day “media marathon” held in a Kyiv food court, Zelenskiy played down suggestions that Trump pressured him in exchange for U.S. military aid to help Ukraine battle Russian-backed separatists. Democrats leading the impeachment inquiry in Congress believe Trump held up the aid to use it as leverage to pressure Ukraine and advance his domestic political interests.

Responding to questions from The Associated Press, Zelenskiy said he only learned after their phone call that the U.S. had blocked hundreds of millions of dollars in military aid to Ukraine.

“There was no blackmail,” he said.

“We are not servants. We are an independent country.”

Zelenskiy met with journalists in groups of about 10 on the second floor of a hip food hall built in an old factory in Ukraine’s capital. While he fielded questions in Ukrainian, Russian and English from journalists sitting with him around a table, others sat below eating.

At one point, he leaned over the railing to see a woman who shouted up that she had not yet received the government subsidies she needs to pay her utility bills and he promised to help.

For a full 14 hours, starting at 10 a.m. and ending just after midnight, he answered questions from about 300 journalists.

The July call had embarrassed the 41-year-old president because it showed him as eager to please Trump and critical of European partners whose support he needs to strengthen Ukraine’s economy and to end the conflict with Russia.

Trump tweeted Thursday that Zelenskiy’s comment that there was no blackmail during the July call “should immediately end the talk of impeachment!”

The President of the Ukraine just stated again, in the strongest of language, that President Trump applied no pressure and did absolutely nothing wrong. He used the strongest language possible. That should end this Democrat Scam, but it won’t, because the Dems & Media are FIXED!

“I don’t want to be pulled into this because I understand that my words could impact the elections of the American people,” he said.

Trump has said the United States has an “absolute right” to ask foreign leaders to investigate corruption cases.

Ukraine’s top prosecutor last week said his office would review several cases related to the owner of the gas company where Hunter Biden sat on the board, and Zelenskiy on Thursday invited U.S. and Ukrainian prosecutors to cooperate, but insisted he would not interfere.

Zelenskiy said Ukraine would investigate because otherwise we “can’t say yes or no” as to whether there was any such interference.

He said he thought the July call would lead to an in-person meeting with Trump, and wanted the American leader to come to Ukraine. Zelenskiy said the “key question” for him was to try to persuade the White House to “change its rhetoric” about Ukraine as a corrupt and untrustworthy country.

Trump said the military aid was frozen because of concerns about corruption in Ukraine, but the move prompted a congressional outcry and the money was released in September.

Asked what Ukraine did to persuade the U.S. to release the aid, Zelenskiy said: “We have many diplomatic contacts. And in case we need to find a solution to questions of this level, questions about our country’s security, we use all our powerful possibilities.” He didn’t elaborate.

A TV and film comedian, Zelenskiy overwhelmingly won the presidency in April on promises to fight corruption and end the five-year conflict with Moscow-backed separatists in eastern Ukraine. He’s treading carefully to ensure continued support from the U.S. while trying to make peace with powerful neighbor Russia.

Most of the questions at Thursday’s unusual media event related to the Russia conflict or Ukraine’s economic troubles.

Zelenskiy also joked about Trump’s Twitter missives, saying he doesn’t expect a change in U.S.-Ukrainian relations in the future, “but if there is, we’ll learn about it on Twitter.”

Inna Varenytsia in Kyiv contributed to this report.