UK’s Johnson moves to suspend Parliament ahead of Brexit

Though Johnson previously had refused to rule out such a move, the timing of the decision took lawmakers — many of whom are on vacation — by surprise.

Lawmakers reacted with fury, including John Bercow, speaker of the lower House of Commons, who was not told in advance of Johnson’s plan.

“Shutting down Parliament would be an offense against the democratic process and the rights of parliamentarians as the people’s elected representatives,” Bercow said. “Surely at this early stage in his premiership, the prime minister should be seeking to establish rather than undermine his democratic credentials and indeed his commitment to Parliamentary democracy.”

The main opposition Labour Party leader Jeremy Corbyn wrote to the queen to protest “in the strongest possible terms on behalf of my party and I believe all the other opposition parties are going to join in with this.”

But the monarch declined to get involved, in keeping with her steadfast refusal to interfere in politics. As head of state, she is politically neutral and acts on the advice of her government in political matters. 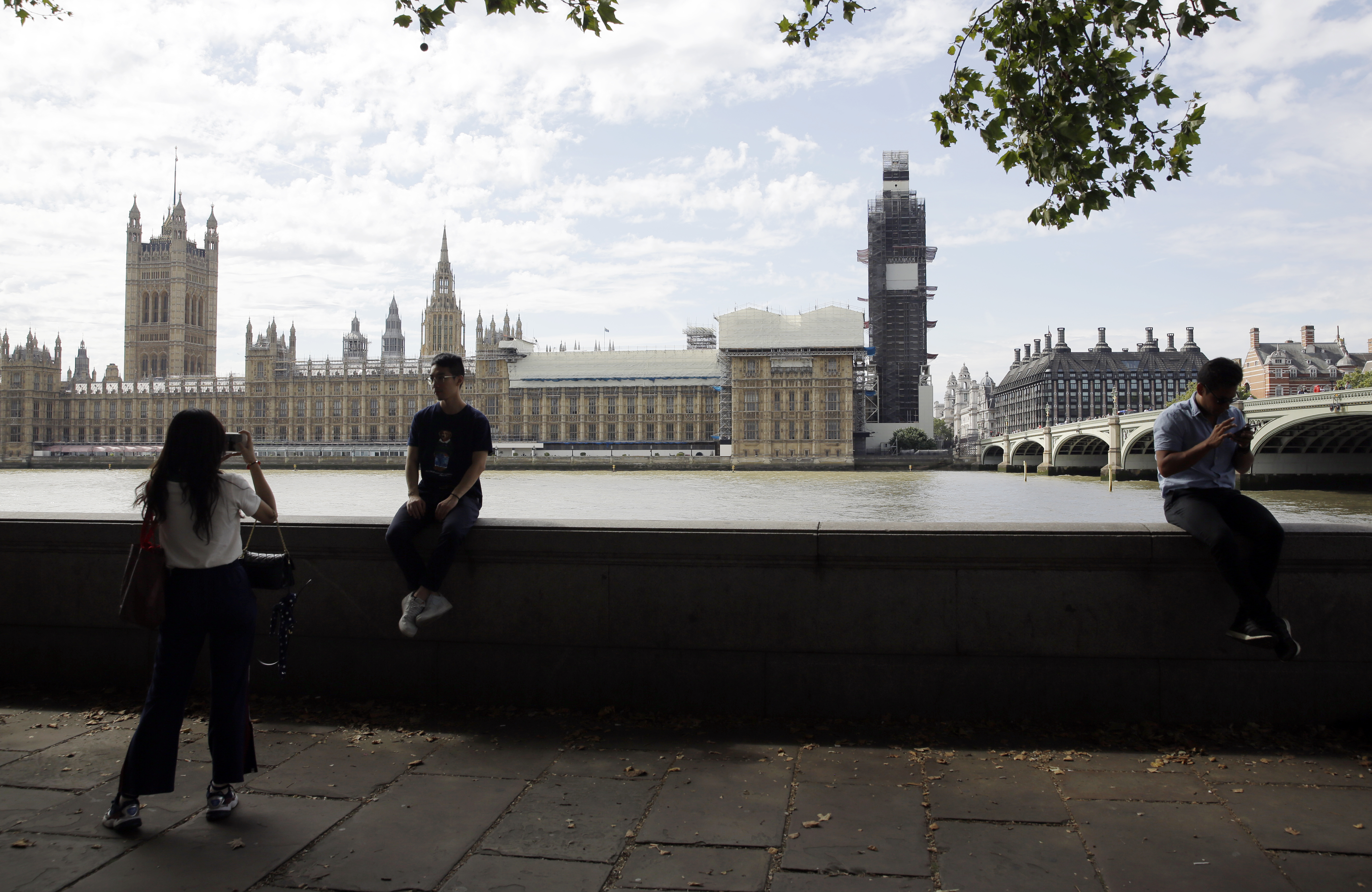 Tourists take photos near the Houses of Parliament in central London, Wednesday, Aug. 28, 2019. British Prime Minister Boris Johnson asked Queen Elizabeth II on Wednesday to suspend Parliament, throwing down the gauntlet to his critics and causing outrage among opposition leaders who will have even less time to thwart a no-deal Brexit. (AP Photo/Matt Dunham)

The House of Commons will convene from Sept. 3-10 and then was scheduled to go on a break until Oct. 9 — though lawmakers had suggested they might cancel that break and stay in session because of the national crisis. But Johnson said he has decided to ask the queen to give her speech that outlines the government’s legislative agenda on Oct. 14.

Since Parliament is normally suspended before her speech, the decision means opposition lawmakers would be unlikely to have enough time to pass laws blocking the U.K.’s withdrawal from the European Union without a negotiated deal on Oct. 31.

The EU is adamant that it will not renegotiate the agreement struck with former Prime Minister Theresa May on the terms of Britain’s departure and the framework of future relations. Without such a deal, Britain faces a chaotic Brexit that economists warn would disrupt trade by imposing tariffs and customs checks between Britain and the bloc, send the value of the pound plummeting and plunge the U.K. into recession.

“Whatever one’s views on Brexit, once you allow a Prime Minister to prevent the full and free operation of our democratic institutions you are on a very precarious path,” he said.

“As a fellow parliamentarian, my solidarity with those fighting for their voices to be heard,” he tweeted. “Suppressing debate on profound choices is unlikely to help deliver a stable future EU-UK relationship.”

On Tuesday, opposition lawmakers declared that they would work together to try to stop a departure from the EU without an agreement, setting up a legislative challenge to Johnson and his promise to complete the divorce by Oct. 31.

Some 160 lawmakers have signed a declaration pledging “to do whatever is necessary” to prevent Johnson from bypassing Parliament in his plans.

Johnson has told EU officials it won’t be possible to agree a deal on Britain’s departure from the bloc without the removal of controversial language on a “backstop,” aimed at avoiding the return of a border between EU member Ireland and Britain’s Northern Ireland. He said at the close of the G-7 summit in Biarritz, France, Monday that he was “marginally more optimistic,” of progress.

Scott Lucas, a professor of international politics at the University of Birmingham, said Johnson’s maneuver touched off the biggest crisis since the abdication of King Edward VIII to marry the divorced American socialite, Wallis Simpson.

It’s also a potential economic crisis because of the projected drop in GDP, he added.