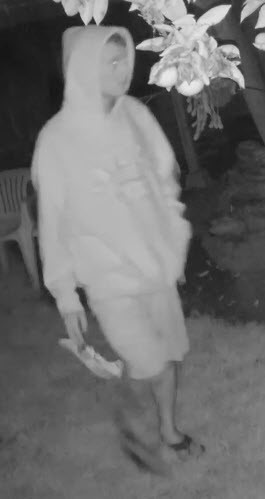 SAN DIEGO (KUSI) – Authorities reached out to the public Wednesday for help in identifying an arsonist who set a half-dozen small early-morning fires in Ocean Beach and Point Loma over a 4 1/2-hour period last month.

The blazes erupted in and near backyards of residences on Catalina Place, Froude Street, La Cresta Drive, Monaco Street, Muir Avenue and Piedmont Drive between 12:30 a.m. and 5 a.m. on Sept. 28, according to San Diego police.

The fires damaged “various items,” caused minor scorching to the exterior of one home and blackened patches of vegetation, Sgt. Rick Pechin said. Citing ongoing investigations in the case, the sergeant declined to disclose what types of objects were burned.

Surveillance cameras captured indistinct images of the suspected perpetrator, who was dressed in shorts, a hooded sweatshirt and thong sandals.

Anyone with information about the case is asked to call San Diego County Crime Stoppers at 888-580-8477 or contact the agency online at sdcrimestoppers.org. Tipsters may remain anonymous and could be eligible for a reward of up to $1,000.