The wind-driven blaze erupted for unknown reasons about 11:15 a.m. just west of Interstate 15 and north of Lilac Road in Pala Mesa amid gusty, arid weather.

At least 65 structures have been destroyed.

Within an hour, the burn area had grown to about 50 acres as ground and airborne crews labored to keep the blaze, dubbed the Lilac Fire, from becoming a disastrously out-of-control conflagration like others raging this week across Southern California.

By 2 p.m., the flames had spread over roughly 500 acres, were threatening an estimated 1,000 homes and had sent a thick pall of brown smoke to the southwest above the North County and out over the ocean, according to Cal Fire.

"This fire could make all the way through Oceanside to the coast if it continues,” he said.

At least 23,000 residents from about 5,000 homes were under evacuation orders as of Thursday night, according to San Diego County officials. That number grew overnight and in the early morning hours Friday.

#LilacFire burns down homes in Fallbrook’s Rancho Monserate Retirement Community. Tune in to KUSI or watch live on our app for most up to date information! Stay safe! pic.twitter.com/qQkQxKBSGk

Three residents and two firefighters were injured. One firefighter suffered smoke inhalation and another sustained a separated shoulder but he

At least six injuries have been reported, including a firefighter who dislocated a shoulder "popped it back in” and was already back on the job, Schuler said. Another firefighter was taken to a hospital for smoke inhalation. Three non-firefighters suffered burn wounds of unknown severity while another person suffered a case of smoke inhalation

Many of the structures lost to the flames were residences in a mobile home retirement community near the origin point of the blaze, officials said.

During a late-afternoon news conference, authorities urged residents of communities near the site of the blaze — and across the San Diego region — to remain vigilant in the face of ongoing threats of wildfire amid the dicey and unseasonable weather conditions gripping the area.

"We are nowhere near the end of this,” county Deputy Chief Administrative Officer Ron Lane said. "There are going to be more evacuations. There are thousands of homes that are within the path of (this fire), and every resident needs to take this very seriously and be prepared to take care of themselves and their families.”

Sheriff Bill Gore called on the public to "stay alert” and keep close tabs on the blaze via news accounts and local-government bulletins issued online. 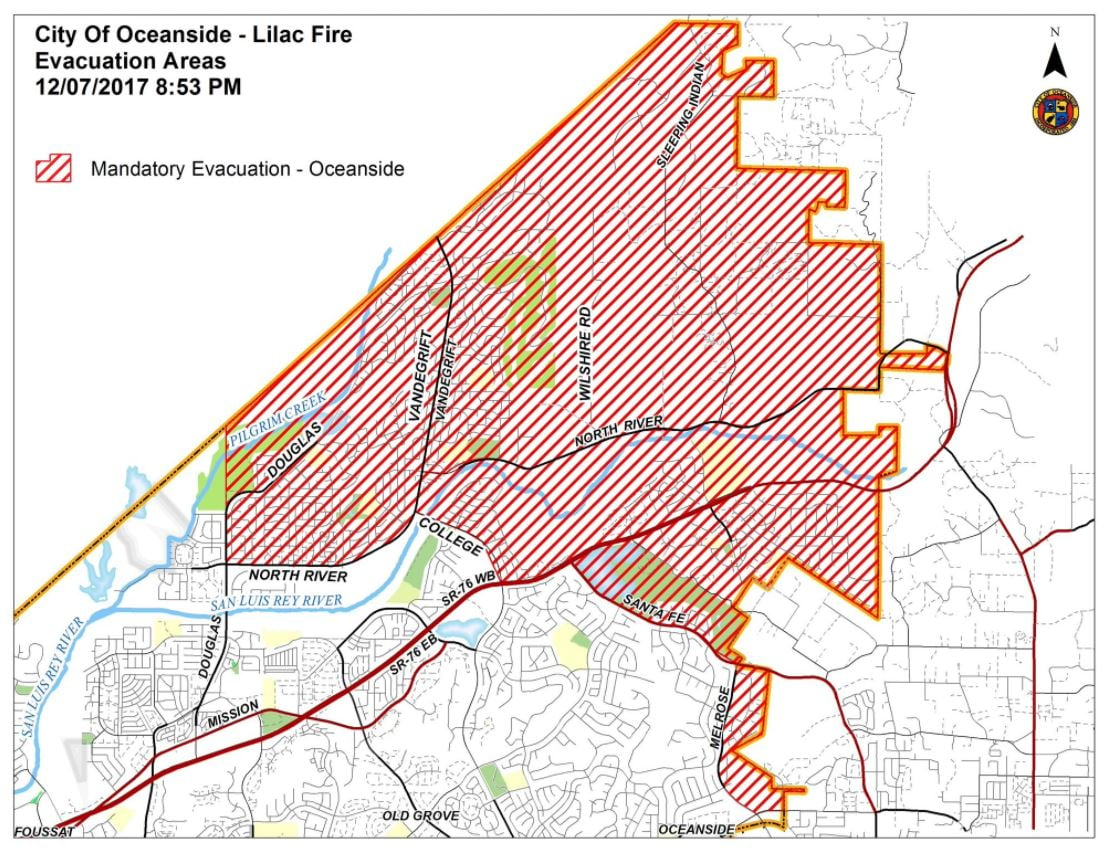 "I can’t emphasize this enough — if you feel threatened in any way, don’t hesitate to self-evacuate,” Gore said. "Get your family out of harm’s way. Go to some relatives, go to some friends or go to one of the (evacuation) sites … . But don’t wait for that … deputy to knock on your door, because there’s not that many of us out there.”

San Diego County was quick to proclaim a state of local emergency due to the blaze. The decree, issued in the mid-afternoon, will help make the region eligible for state and federal resources. Later in the afternoon, Gov. Jerry Brown issued a state emergency proclamation for San Diego County.

Authorities issued a mandatory evacuation order for all areas south of SR-76, west of I-15, north of Gopher Canyon Road and east of Mission Road/Vista Way. Among the evacuated sites were Bonsall High School, Sullivan Middle School and all neighborhoods along West Lilac Road.

In the early evening, the county issued new evacuation orders for the region south of Burma Road, east of Wilshire Road, north of North River Road and west of South Mission Avenue.

Additional orders were then issued for the area south of Reche Road, west of Interstate15, east of Green Canyon Road and South Mission Road, and north of state Route 76.

Residents of other nearby communities were advised to seriously consider retreating to safer areas as a precaution.

Authorities set up evacuation centers for the displaced at Bostonia Recreation Center in El Cajon, Carlsbad Forum in Carlsbad, East Valley Community Center in Escondido and at Oceanside and Fallbrook high schools.

Evacuees were also being directed to the Pala Casino. People with horses and livestock were advised to take their animals to shelter at the Del Mar Fairgrounds.

HELP! Livestock Evacuation volunteers needed! If you are able to assist, please call Gretchen Conwell at (760) 212- 1518

The California Highway Patrol closed down state Route 76 from Gird Road to Old Highway 395 and blocked off the latter route between West Lilac Road and state Route 76.

A contingent of about 700 firefighters from various area agencies was working to control the blaze as of late this afternoon, Cal Fire Deputy Chief Dave Nissen said. On Friday morning, Navy and Marine Corps aircraft are expected to join the other firefighting helicopters and air tankers assigned to the fire, he told news crews.

Overnight, aircraft from the city of San Diego and Kern County will continue to conduct water drops, according to Nissen.

Video from the @SDFD Strike team at the #LilacFire No fires in city of SD now but please be prepared. Ready, Set, Go! guide is available in Eng/Span at https://t.co/fKDMZearbi …
Don’t wait until fire like this is at your doorstep. Leave early.

More info on the #KUSINews pic.twitter.com/9MxypTxwga

Campuses in 10 school districts in northern and eastern San Diego County will be closed Friday due to the out-of-control wildfire, high winds and potential power outages, officials said. Some are potentially in the path of the fire.

The cause of the blaze — which broke out amid a National Weather Service "red flag” wildfire warning slated to expire Sunday night — was not immediately clear.

This is a developing story and will be updated as information becomes available.