LAGUNA WOODS (KUSI) – A man who opened fire inside a Laguna Woods church, killing one person and injuring five others, had no connection to the Taiwanese congregation or anyone in it, but was a Chinese immigrant motivated by hate due to political tensions between China and Taiwan, Orange County Sheriff Don Barnes said Monday.

David Wenwei Chou, 68, of Las Vegas, Nevada, remains jailed on suspicion of one count of murder and five counts of attempted murder stemming from the 1:25 p.m. Sunday shooting at the Geneva Presbyterian Church at 24301 El Toro Road. Prosecutors plan to file charges on Tuesday.

He is accused of walking into the church as a Taiwanese congregation was holding a post-services banquet to honor a visiting pastor, barricading multiple doors so those inside could not escape, then initially mingling with parishioners before opening fire, killing one person and injuring five others. He allegedly chained some doors, tried to nail one shut and put super glue in the locks of others, all while the congregants were eating lunch, Barnes said.

Dr. John Cheng, 52, a physician with South Bay Medical Group in Aliso Viejo, was killed when he charged the gunman and attempted to disarm him, Barnes said. Cheng is survived by a wife and two children. 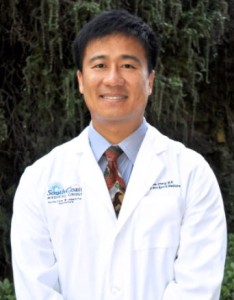 Dr. John Cheng was killed when he attempted to disarm the gunman, giving congregants time to push the gunman down and hogtie him.

“Dr. Cheng is a hero in this incident,” Barnes said, adding that the doctor’s actions bought time for other parishioners to subdue the suspect and eventually hogtie him.

“Without the actions of Dr. Cheng, there is no doubt there would be additional victims in this crime,” Barnes said.

Orange County District Attorney Todd Spitzer said it appears that after Chou shot Cheng, his gun jammed, giving congregants time to subdue the suspect, including slamming a chair over the gunman’s head.

Investigators found a note in Chou’s car in the church parking lot that indicated his animosity toward Taiwan. Spitzer said it appears Chou’s family was forced to move from China to Taiwan and that Chou complained he was treated poorly as an outsider over the years. Investigators have multiple translators going over the note to interpret it correctly, Spitzer said.

Investigators were still working to determine why Chou, who was a licensed security guard in Nevada, chose the Orange County congregation to target, since he had no known ties to anyone connected with it.

Barnes said there is no similar congregation in Las Vegas and the one in Orange County may have been the closest one for the suspect.

When the shooting erupted, parishioners took quick action. Cheng charged the gunman when he paused to reload his weapon. The pastor also threw a chair at the gunman, Barnes said, and others advanced on him, held him down and hogtied him with electrical cords.

In addition to Cheng, five other people were shot:

None of their names have been released. Two of the victims have been upgraded to good condition and two others were also expected to survive. The condition of the fifth one was not immediately available.

According to the South Coast Medical Group website, Cheng was certified in family and sports medicine, the son of a physician and an “accomplished martial arts instructor.” He grew up in Texas, studied at Texas Tech School of Medicine and did his residency at UCLA.

Two semi-automatic handguns were taken from the attacker. Federal officials said Monday that Chou legally purchased the weapons in Las Vegas, one in 2015 and the other in 2017. Barnes said the magazines the gunman brought with him in one of two bags were legally obtained in Nevada. Another bag contained the four incendiary devices that appeared to be Molotov cocktails.

Chou is expected to appear in Orange County Superior Court on Tuesday if prosecutors file charges by then. He is facing a variety of possible state charges, but the FBI has also opened a federal hate crime investigation.

Congregant Jerry Chen, 72, told the Los Angeles Times he was in a nearby kitchen at the church just before 1:30 p.m. Sunday when he heard the shots.

“I heard the gun sounds,” he said. “Then, I heard two or three more gunshots. He was just randomly shooting.”

Chen told the Times he then saw the pastor, Billy Chang, hit the gunman with a chair when the shooter paused to reload his weapon. That’s when other members of the congregation tackled him.

The Los Angeles branch of the U.S. Bureau of Alcohol, Tobacco, Firearms and Explosives sent special agents to Laguna Woods to assist the OCSD with its investigation.

Laguna Woods is an age-restricted community for people 55 and older. It opened as Leisure World in 1964.

Orange County Supervisor Lisa Bartlett of the Fifth District said the board was making sure mental health professionals would be made available to those impacted by the shooting.

“A shooting at a church in Laguna Woods has left multiple people injured and one deceased. This is upsetting and disturbing news, especially less than a day after a mass shooting in Buffalo,” Rep. Katie Porter, D- Irvine, whose district includes Laguna Woods, said in a statement Sunday. “This should not be our new normal. I will work hard to support the victims and their families.”

“There’s no place for hate in this community and we won’t tolerate it,” Barnes said.

Porter told reporters after Monday’s news conference that the sheriff “gave a very powerful message,” and said it was important that multiple law enforcement and political leaders stood in unison behind him at the time he condemned bigotry.

Porter praised the first responders for a “very impressive” response to the violence.

Barnes said his deputies were able to gain access to the church almost immediately, despite the suspect’s barricade efforts.

Los Angeles County Supervisor Janice Hahn also weighed in Sunday, releasing the following statement regarding deadly gun violence in both Buffalo, New York and Orange County. “We cannot be a nation where multiple mass shootings in a single weekend is normal, where gun violence and the hate that so often drives it is tolerated. We need Congress to do something and pass the same, commonsense gun laws that every other modernized democracy has in place, and here in L.A. County, I am committed to getting as many guns off the street as I can.”

“We are actively monitoring the shooting at a church in Laguna Woods and working closely with local law enforcement. No one should have to fear going to their place of worship. Our thoughts are with the victims, community, and all those impacted by this tragic event.”

The shooting came one day after a supermarket in Buffalo, New York, was targeted by a heavily armed shooter who killed 10 people and wounded three others. Authorities arrested an 18-year-old man in that crime, which they said was racially motivated. Eleven of the 13 victims were Black.

Sen. Dave Min, D-Irvine, issued a statement extending his “thoughts and prayers,” adding, “It is almost unthinkable that one of the safest places in the country would be hit by the specter of gun violence.”

“We should refuse to accept these tragedies as the new normal in our schools, our houses of worship or anywhere,” Min said.

Rep. Adam Schiff, D-Burbank, issued a statement, saying, “It is horrifying to be grieving yet another tragic shooting in just 72 hours — another weekend in America defined by senseless violence.

“Tonight, my heart is with the congregants of Geneva Presbyterian Church and the entire Laguna Woods community as they mourn and pray for their loved ones. My heart is also with those in Buffalo, in Milwaukee, and every community torn apart by gun violence.”

Schiff concluded by adding, “I will never accept this bloodshed as unavoidable. It can be stopped. But as we’ve seen over the past few days, months and years, unless we take immediate action on gun safety measures, history will repeat itself. Again and again. Enough is enough. We must act.”